Toxic frogs: how do they make their poison?

There is a big question mark over how amphibians in the Peruvian rainforest make poison. The answer might have important medical implications 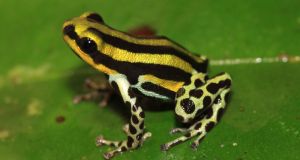 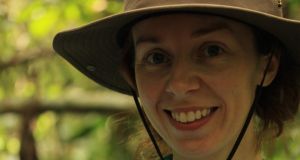 In the rainforest, you look with your ears. It’s a lesson that biologist Dr Mary O’Connell learned quickly when she landed in Peru last January to find frogs. “There’s so much noise in the rainforest, especially at night, it was a cacophony,” she says.

But as she picked her way through the dense vegetation in Panguana, a conservation area focused on the promotion of research into biodiversity in the Amazon of central Peru, O’Connell’s ear started to tune in to her quarry. She was looking (or listening) for poison-dart frogs, some of which are thimble-sized. “The third time I went out I suddenly could differentiate the animal calls,” she says. “I would hear a call and know what species it was, and that he was down low, about four feet away.”

Why was she listening for tiny amphibians, half the planet away from her lab in Dublin City University? “We are on a mission to find out how poison-dart frogs make their poison,” explains O’Connell.

“This biological process is very poorly studied, we don’t know how this is related to what they eat or their behaviour, and we don’t have a genome, so there is a big question mark. We don’t know if they have genes to make their own toxins – we suspect that they make some but we suspect most of the toxin is sequestered from their diet when they eat something poisonous. We want to know how they manage that.”

O’Connell, a senior lecturer in biotechnology at DCU, admits she was the “newbie” in the expedition, which was led by Dr Karen Siu Ting, a researcher at DCU, and Dr Chris Creevey from Aberystwyth University.

Siu Ting’s native Peru is home to around 560 amphibian species that we know of, but researchers are still finding new species in unexplored areas and even in museum collections, she notes.

The January expedition was Siu Ting’s fourth time in Panguana and she has noticed some stark changes around the area. “Unfortunately I noticed that a lot of the forests on the journey there are more bare than years ago,” she says. “Panguana and other sites in the Peruvian Amazon are severely threatened by logging and illegal mining.”

One of her motives for studying the frogs in the region is to protect them, explains Siu Ting. “Amphibians are a very special group of organisms because they have adaptations to life in water and on land,” she says “The major causes for population declines in amphibians worldwide are habitat loss and pollution, and this causes declines in their abundance and diversity which, if identified on time, can be reversed. This now puts amphibian researchers in a race against extinction – we want to discover whatever is still left and protect it.”

Since 2003, Siu Ting has been studying poison-dart frogs in Panguana. “Some amphibian lineages have developed a way to digest and ‘steal’ toxins from their diet in a process called toxin sequestration,” she explains. “The sequestered toxins are then transferred to the skin and makes them very toxic to predators. This ability is also related to the bright colours and contrasting patterns on their skins, which warn predators that they are toxic to eat.”

Siu Ting is a dab hand at catching the tiny frogs in the rainforest, which O’Connell admits is an acquired skill. “For the particularly skittish frogs we used an empty perspex tube: you align it with the frog and place it over them so they can’t hop away,” she says.

Before that though, the expedition had to find the frogs in the first place, and they had some tricks up their sleeves. “We would make a recording of the male frog’s call for a particular species, then place a speaker into the area where we thought the frog was,” says O’Connell. “The frog would hear the call and come out to check what was going on and to defend their territory.”

With frogs in hand, the researchers were able to collect information about various species, including their diet, the toxins they were producing on their skin, and samples for working out their genomes.

“We hope that looking at their genes will tell us whether and how they have evolved a resistance to the toxin that they are eating,” says O’Connell. “Lots of toxins target tiny molecular channels that are pain channels, so if you find an organism that has done something to their pain channels so that they can withstand the toxin, then down the line there are some medically important and relevant things these frogs could teach us, but for now we are looking at the basic mechanisms.”

‘IT BLEW MY MIND’: LIFE IN THE PERUVIAN RAINFOREST

For Dr Mary O’Connell, a typical day at work in Dublin City University involves poring over DNA and molecular data from animals and microbes, looking for patterns and processes that tell her about evolution, the quirks that let particular species thrive in particular environments and how different species are connected.

But spending two weeks in the Peruvian rainforest brought it all to life. “It blew my mind to see how everything is connected in that living environment,” she says. “The animals were calling noisily, every surface seemed to be alive and everything lives on everything – layers of living things – trees, moss, lichen, leaves, fungi, insects.”

Being immersed in that life-rich milieu prompted her to think not just about the molecules and genetics that usually catch her attention, but the bigger picture of biodiversity, extinction, speciation and interconnectedness.

“I am always full of questions, but this time I was forming different questions. They were more related to behaviour and biodiversity,” she says. “Being there got me thinking about the big picture and how, if you lose one of those species, then that part of the chain of living things is disrupted, sometimes with huge knock-on effects.”

O’Connell was also quite happy to lose her connection to the online world for a couple of weeks. “When I came out of the rainforest and I no longer had stuff crawling in my peripheral vision, I found that weird. It now felt sterile,” she says. “But while I was there it almost felt like a retreat. This is why I became a biologist. It reminded me of why I love biology: to see it as it is.”