The US prepares for a rare total eclipse in 2017

That’s Maths: Total eclipses over populated areas are uncommon, but a large swathe of the US will experience one in two years 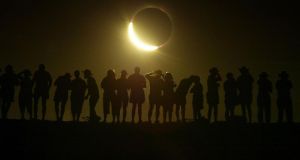 A solar eclipse viewed from the Australian outback in 2002. Photograph: David Gray/Reuters

Precisely two years and a day from today, the moon’s shadow will sweep across the United States at a speed of more than 2,000km per hour. The Great American Eclipse of 2017 will generate a frenzy of activity.

Solar eclipses are not especially rare, but this one is of particular interest, as the path of totality will cross some 13 states. The shadow will start at the Pacific coast at about 10.15am local time on August 21st, 2017, and will reach the Atlantic seaboard 90 minutes later.

Millions of Americans will witness the grandeur of the solar corona as day becomes night along a path stretching from Oregon to South Carolina. The path of totality is within a day’s drive from almost everywhere in the US. The duration of totality will be more than two minutes at the centre of the path. It will be the first total solar eclipse visible from the southeastern US in nearly 50 years.

The sun is 400 times farther than the moon from Earth, as well as 400 times the moon’s diameter. So, viewed from Earth, the two bodies appear similar in size. A solar eclipse occurs when the moon passes between Earth and sun, blocking out all direct sunlight.

If the Earth’s and moon’s orbits were both in the same plane, we would have one solar and one lunar eclipse each month. But the moon’s orbital plane is tilted, and the orbits are not circular but elliptical, so the pattern of eclipses is somewhat irregular.

Astronomers have studied eclipses for millennia. The ancients observed a number of cycles in the occurrence of eclipses. Once the date and time of a particular eclipse was known, it was possible to predict similar events using observed cycles and simple extrapolation in time.

The best-known cycle is the saros series, which has a period of 223 lunar months (about 18 years). The 2017 eclipse is a member of saros cycle 145. The saros cycle was known to Babylonian astronomers and to the ancient Greeks.

Modern prediction of eclipses is based on Newton’s laws of motion, what we call classical mechanics. We can write down precise equations describing the future movements of the Earth, moon and sun, but solving them is another story. It is an example of the difficult three-body problem. Newton wrote to his friend Edmond Halley (of comet fame) that his calculation of the moon’s motion made his head ache.

Nasa has a site with a range of maps of the 2017 event. It will be updated as eclipse day approaches. Weather prospects along the track are important, but these must be based on climate statistics.

We can predict astronomical events many years in advance, but anticipation of conditions in the atmosphere remains a problem and, at this range, all that we can give are the average August conditions.

In any given year there are at least two solar eclipses, but they generally occur over oceans and attract little attention. Total eclipses over populated areas are uncommon. A partial eclipse will be visible throughout the US, but that is nothing compared to the “total experience”.

So get to the path of totality: you have just 732 days.

1 Coronavirus: Restrictions set to be extended but partial lifting may be possible next month
2 Growing hope in Government of partial easing of restrictions after May bank holiday
3 Coronavirus: Ireland will have to ‘live alongside the virus’
4 Chief medical officer urges people not to visit hardware stores
5 Coronavirus: Government to extend restrictions for at least two weeks
Real news has value SUBSCRIBE