A wide range of physical phenomena follow logarithmic laws, from modelling human sensation to measuring the severity of earthquakes 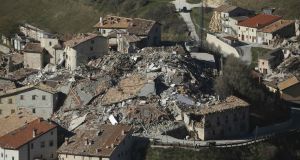 An aerial view of the destruction caused in the village of Castelluccio in central Italy by a 6.5 magnitude earthquake in October. Photograph: Getty Images

Log tables, invaluable in science, industry and commerce for 350 years, have been consigned to the scrap heap. But logarithms remain at the core of science, as a wide range of physical phenomena follow logarithmic laws.

The method of logarithms was first devised by John Napier, 8th Laird of Merchiston. Known as Marvellous Merchiston, Napier was a landowner and amateur theologian. Mathematics was a hobby for him, filling time when he was not studying theology or managing his estates. In 1614, Napier published a book modestly titled Description of the Wonderful Rule of Logarithms. The essential property of logs is that they convert multiplication into addition. Thus, they greatly simplify complex calculations, and logarithms contributed to the advance of the sciences, most notably in the celestial sphere.

Napier’s logs assisted Johannes Kepler to analyse astronomical observations and deduce his laws of planetary motion. The great Pierre-Simon Laplace observed that “by shortening the labour, they doubled the life of the astronomer”. Logarithms were also valuable for navigation and for surveying. The slide-rule, an essential tool for engineers and scientists up to the 1970s, was a practical application of logarithmic principles to simplify calculations.

Napier’s system was innovative, but cumbersome to construct and awkward to use. Henry Briggs, a professor of geometry at Gresham College in London, developed a simplified and more convenient system. In 1615, Briggs made the difficult journey to Scotland to visit Napier. According to an eye-witness to their encounter, “almost one quarter of an hour was spent, each beholding the other in admiration, before a word was spoken”. Briggs and Napier agreed to adopt the simplified system, now called common logarithms.

Many physical variables can take values covering several orders of magnitude. As a result, smaller values can be swamped or masked by values at the high end of the range. A log scale compresses the values to a more manageable range. Using logarithmic axes, graphs of quantities that vary exponentially can be converted to linear graphs, greatly facilitating analysis and understanding.

In psychophysics, log laws are used to model human sensation. Visual perception of light intensity is logarithmic. Since the brightness of stars varies over an enormous range, astronomers have devised a reverse logarithmic scale of apparent magnitude. The brighter the star, the smaller the magnitude. With Vega as a zero reference, the dimmest star visible to the naked eye is of magnitude five.

The intensity of audible sounds can vary by a factor of more than a trillion. In acoustics, sound intensity is measured in decibels. The decibel level is 10 times the log of the ratio of energy to that of a very weak sound known as the threshold of hearing. On this scale, a whisper is 20dB, normal speech is about 60dB and a rock concert may be over 110dB.

Today, we perform heavy calculations with great ease using calculators or computers, and logarithms are not required. Yet they underlie many physical processes and are never far away in mathematics and science. In a sense, we live in a logarithmic world.

Peter Lynch is emeritus professor at the school of mathematics statistics, University College Dublin. He blogs at thatsmaths.com. His book That’s Maths has just been published by Gill Books