Substance may be used to kill drugs resistant bacteria 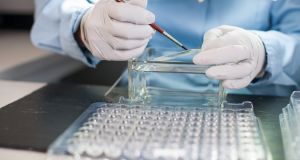 Doors have been opened for a new family of antibiotics that may be able to kill bacteria that have become resistant to existing drugs, thanks to Irish-based scientists.

Researchers at Trinity College Dublin have delivered a highly accurate structural blueprint for the substance globomycin, which will allow researchers to begin studying its antimicrobial action.

Details of the work in Trinity’s school of biochemistry and immunology, led by Prof Martin Caffrey, was published on Thursday evening in the journal Science.

Many important infectious bacteria are becoming resistant to existing antibiotics.

The World Health Organisation (WHO) has warned that many bacteria will become untreatable unless new drugs are discovered.

However, globomycin can treat such bacteria, and the Trinity group have paved the way for further research on the substance.

“Our globomycin blueprint can be used to inform the design of globomycin derivatives or analogues with improved binding, efficacy, selectivity and pharmacokinetic properties,” Prof Caffrey said.

The blueprint allows scientists to produce slightly modified versions of the substance and helps in the discovery of other substances that work in the same way as globomycin.

The antimicrobial action of the substance had been known for more than a decade.

However, further research on the subject went into limbo because no one could deliver the structural blueprint, an impediment that has now been removed.

“What is especially exciting is that the blueprint makes it hard to conceive bacteria developing resistance to globomycin or newly developed analogues,” Prof Caffrey said.

Achieving the detailed structure was based on a technique called “X-ray crystallography”.

Scientists produce crystals of the substance of interest and then fire finely focused and powerful X-ray beams at the crystals to discover the structure.

However, the real challenge is being able to produce good crystals.

The Caffrey group had to develop a particular mix of components in order to deliver readable crystals of globomycin.

The work is supported by Science Foundation Ireland.