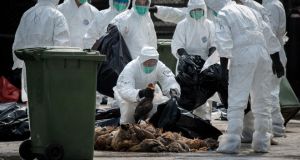 Officials pile dead chickens into bags in Hong Kong earlier this year in a mass cull after the deadly H7N9 virus was discovered in poultry imported from mainland China. Photograph: Philippe Lopez/AFP/Getty Images

US virologist Yoshihiro Kawaoka has form when it comes to sparking controversy. Last month, his team at the University of Wisconsin-Madison published a paper that described engineering an entirely new flu virus that causes severe illness when transmitted between ferrets in sneezed, airborne droplets.

Kawaoka is one of a small number of researchers tinkering with the genomes of bird-flu strains to model how they might acquire human pandemic potential. Many fear these hubristic microbiologists might trigger a man-made plague if the synthetic bugs ever escape from their laboratories.

In another project, Kawaoka developed a version of one of the most dangerous influenza viruses yet known. Bird-flu strains contain genes highly similar to the 1918 Spanish flu (which was resurrected from permafrost in 2005), and Kawaoka’s team selected the most similar from eight avian viruses to create a viable 1918-like hybrid.

When inoculated into ferrets, this proved far more virulent than a wild duck virus, but less so than the 1918 virus, which killed one ferret. However, unlike the 1918 virus, it did not transmit between them.

They then spliced in entire 1918 genes, focusing on proteins critical for transmission. Two of three ferrets died, but crucially, they infected other ferrets in neighbouring cages. Through successive mutations, the team selected ever more transmissible strains in a “forced evolution” towards infecting mammalian and human hosts, by adapting the viruses to the lower temperature and pH environment of the human nose and throat.

To flu virologists, this paper delivers a cascade of data on the mechanisms by which avian viruses hop the species barrier. But the risk of a man-made pandemic has startled other virologists and epidemiologists. Simon Wain-Hobson of the Pasteur Institute in Paris chairs the Foundation for Vaccine Research, which has petitioned US president Barack Obama and president of the European Commission Manuel Barroso in a letter signed by 56 microbiologists, including Nobel laureate Richard Roberts. They call for an urgent review of the dangers of such “gain-of-function” research and claim the science is speculative and of little use in producing vaccines or anti-viral drugs.

Meanwhile, the Centers for Disease Control in Atlanta have just closed down their biosafety level-three labs (such as Kawaoka heads at Wisconsin) due to safety breaches there. Eighty-four workers were exposed to live anthrax last month and there was an accidental release in March of an avian flu cross-contaminated with the lethal H5N1 strain. The Atlanta centre’s own 2012 analysis reported 727 US incidents of theft, loss or release of “select agents and toxins” from 2004 to 2010, causing 11 lab-acquired infections.

A May report in PLoS Medicine cited the 1977 pandemic, which many scientists believe escaped a lab, causing “significant mortality” over many years.

The new dual-use regulations arose after late 2011, when the US National Science Advisory Board for Biosecurity declared a Kawaoka paper (and one by Ron Fouchier in Rotterdam) too dangerous to publish. Both had enhanced the human transmissibility of the deadly H5N1 bird flu, Kawaoka by “reassorting” it with the contagious 2009 swine flu. Fouchier had publicly quipped that his was “probably one of the most dangerous viruses you can make”, alarming anthrax expert Paul Keim, chair of the US advisory board.

Both the World Health Organisation and the advisory board called for key sections of the papers to be redacted. However, after the FBI screened Kawaoka’s team, both bodies backed full publication.

Biosafety rules were tightened in Canada, Germany and the UK, and the dual-use policies were revised. A moratorium on such research was lifted, and last year a Chinese lab again mixed H5N1 with the 2009 pandemic strain, achieving airborne transmission between guinea pigs.

Most recently, the London Independent revealed Kawaoka’s latest unpublished feat: successfully engineering a 2009 H1N1 virus to “escape” the human immune system and all vaccines developed since its emergence. Worse, this was done at biosafety level two, which stipulates little more than “lab coats, gloves, face and eye protection, as needed”. The news was met with incredulity by a lengthening list of senior scientists.

Dr Kim Roberts, Trinity College’s assistant virology professor, has followed the controversy closely. “There are strong arguments on both sides, and I tend to agree with both.” She has done gain-of-function work on attenuated H5N1 at Imperial College London and now does loss-of-function work on human flu, knocking out genes to see how this impairs the virus.

“Kawaoka’s paper is pure basic research, which may not be directly translatable into short-term results, but it has told us incremental things we didn’t know.”

Influenza, with its aches, misery and mucus, is not the common cold. It is a far more dangerous virus that rapidly evolves and has been with us since we domesticated beasts.

Seasonal epidemics ripple across human populations, as new strains evolve in the perpetual arms race with the human immune system.

Every 10-40 years, major pandemics emerge. The 1918 H1N1 Spanish flu killed an estimated 50 million people; the 1957 H2N2 Asian flu two million; the 1968 H3N2 Hong Kong flu one million, and so on, in what some optimistically interpret as a trend towards decreasing severity.

All the above are believed to have emerged from the vast reservoir of influenza strains that exists among waterbirds and migratory fowl and often causes outbreaks in poultry.

Epidemiologists anxiously monitor emerging strains from southeast Asia, where bird flu is endemic, but they were wrong-footed in 2009 when the latest H1N1 pandemic erupted in Mexico, ultimately from pigs, killing perhaps 550,000 people.

Attention has now returned to Asia, where deadly new poultry-to-human infections have been linked to live bird markets: 2003’s lethal H5N1 (of 650 confirmed cases, there were 386 deaths); or, in early 2013, H7N9, which cross-infects much faster from chickens (450 cases in 18 months, with 25-30 per cent mortality).

The dread is that these viruses might adapt to interhuman transmission, and become truly pandemic.