Starring role: the view from the Very Large Telescope

The VLT sits atop a mountain in the desert in northern Chile, home to some of the darkest skies on Earth – the perfect place to observe our universe and its galaxies billions of light years away 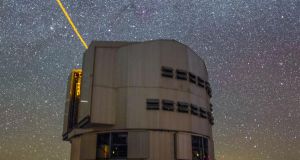 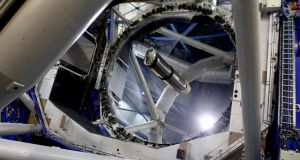 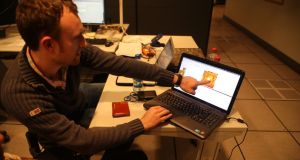 The first planet detected in orbit around a distant star was not seen by the Hubble Space Telescope. No, this honour goes to the appropriately named Very Large Telescope, the world’s largest and most advanced ground-based optical telescope.

The VLT sits on the 2,600m Cerro Paranal mountain in the middle of the Martian-like Atacama Desert in northern Chile, which is home to some of the darkest skies and most hostile land on Earth. Here, the European Southern Observatory’s flagship facility is perfectly placed to observe our universe and its galaxies billions of light years away.

The VLT, which has been in operation since 1999, comprises four unit telescopes with 8.2m-diameter mirrors, four movable 1.8m-diameter auxiliary telescopes and the Vista survey telescope, which works at infrared wavelengths.

The telescopes can see objects four billion times fainter than can be detected by the human eye. They are responsible for the first image of an extrasolar planet, as well as the tracking of individual stars moving around the massive black hole at the centre of the Milky Way.

On the day I arrive, I am lucky enough to see one of the mirrors being removed from a telescope to be recoated at a maintenance building nearby. “This procedure requires lot of precision,” says optical engineer Guillaume Blanchard. “It gets recoated every 18 months, because dust collects on the surface and it degrades the quality of the astro observations.”

The mirror, which weighs 23 tons, gets brought to the biggest dishwasher in the world, where the old coating is removed with acid. After a washing process, it gets coated in particles of aluminium. The mirror itself is thinner than a hair, the rest made of a ceramic plate that doesn’t expand in heat.

I get a tour of the telescopes and then, at sunset, stand inside to watch the roof open and the mirror turn towards the sky, escorted by my guide, Farid Char. In Paranal you get an average of 320 clear nights per year, with an average of 5-10 per cent humidity. Near-perfect conditions.

But what about earthquakes, I ask. “Even though it sits on a fault, the VLT can withstand an earthquake of big proportions,” he says. Research suggests it can withstand up to seven on the Richter scale without damage, and more than eight with only minor cosmetic damage.

The opening process takes about 30 minutes, in which time the sky turns from deep tangerine to lilac. Eventually it becomes black, and then the stars and the astronomers come out for the night.

“The VLT collects more light than the Hubble, which has a 2.5m diameter compared to our 8.2m,” says Zahed Wahhaj, an astronomer working at the VLT.

Munich-based astronomer David Wilman is researching galaxy formations. “We are observing a new star. It’s over 10 billion light years from Earth.” So it’s an old star then? “Well you are looking 10 billion years back into the past. At that time it was only three billion years since the big bang. So it would be old. Very old.”

We look at a computer screen and see this old galaxy when it was young. At this distance the pixilation is low, like out-of- focus street lighting, but Wilman is monitoring it closely. So how can we learn anything in one night, when it takes millions of years for stars to form and they are billions of trillions of kilometres away?

“We have nothing tangible to work from. We can’t just run experiments, so it’s speculative. I’m like an investigator who gets to a murder scene and then tries to unravel the truth. As the big bang is over 13.6 billion years ago, there are fewer stars forming now. So we use the fact that light takes time to reach us to actually look into the past and see the stars form in the early universe. To do this we need big telescopes capturing the tiny amount of light that reaches us here on Earth after 10 billion years,” he says.

Andrew Rakich, an optical engineer based in Munich, says “we can’t see around 95 per cent of the universe, so to me cosmology seems to be in the position of having to work out the shape of the whole iceberg from the tip sticking above the water”.

“Earth-like planets are harder to see because of their close proximity to the parent star. The problem is, it’s like trying to see a match beside a powerful floodlight at a great distance. Until recently it was impossible see these extrasolar planets directly, but now, with the new generation of adaptive optics and large telescopes, a number of extrasolar planets have been directly observed.”

EVEN LARGER TELESCOPE: THE HUNT FOR LIFE
Within the next 15 years we will be able to monitor extrasolar planets much more closely with the building of the European Extremely Large Telescope.

This behemoth will have a 40m mirror and will become the largest, most powerful telescope in he world. It will be set on the mountain of Cerro Armazonas, just a few kilometres away from the existing Very Large Telescope complex. It will cost more than €1 billion to build and commission.

The EELT, which is supported by the European Commission research funding contracts, will be 26 times more powerful than the VLT.

The EELT will be completed in about eight years’ time. It is expected to allow astronomers to probe the earliest stages of the formation of planetary systems and to detect water and try to locate Earth-like planets.

So in the next 15 years, there’s a chance we could find life outside of our own? Yes, the researchers say, albeit reticently: no one wants to get ahead of themselves.

“There are more than 200 billion stars in our galaxy, so we don’t have to look as far as the next galaxy to find life. There are still chances to find traces of life in our own solar system, for example on Mars,” says engineer Gerd Hüdepohl. “In 2018 there will be an ESA mission to search for low-level lifeforms in the soil under the Mars surface.”