Our Neolithic ancestors were able, through the alignment of the site, to capture the turning of the year and the sense of renewal and rebirth, which is at the heart of Christmas 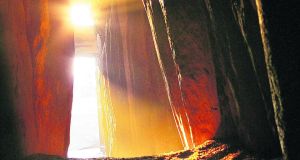 Sunlight passes along the passageway leading to the burial chamber at Newgrange during the winter solstice. Photograph: Alan Betson 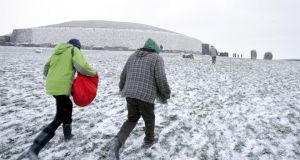 People arriving at dawn to witness the spectacle in 2010. Photograph: Dara Mac Dónaill 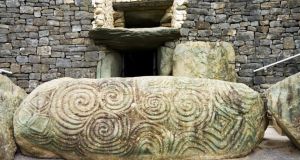 A decorated stone at the entrance to the tomb at Newgrange

For much of the last century, you could wander unannounced into Newgrange. You could even enter the tomb’s main passageway and chamber by getting the key from a local woman who acted as caretaker.

To say the State adopted a laissez-faire approach to the care and maintenance of western Europe’s most spectacular prehistoric monument is an understatement.

Even after the solar alignment was discovered, and as recently as the 1980s, booking a place at the annual solstice event required little more than a politely worded letter to the Office of Public Works.

Visiting the site was something of a minority pursuit; not exactly the preserve of historians and archaeologists, but not high on the public’s radar either. Fast-forward to the present, and things have changed.

This year 30,000 people applied for one of the 50 places available to witness the solstice from inside the tomb. The site receives about 230,000 visitors a year, which doesn’t necessarily reflect the public’s appetite as the authorities limit the daily footfall for conservation reasons.

Perhaps we’ve been slow to appreciate the site’s significance or maybe the increasing interest has something to do with the fall-off in traditional religious practice. Whatever the case, the monument’s solar alignment, first documented in 1967 by archaeologist Michael J O’Kelly, is now an established part of the Christmas calendar.

Archaeologists can be reluctant to talk about religion, but Newgrange is the manifestation of religious belief, says Prof Gabriel Cooney of UCD’s school of archaeology.

“At the heart of all religious systems is an understanding and celebration of the seasonal cycle of natural and human life – and that is what Newgrange does.

“Today, we celebrate that long-gone world and the achievement of Neolithic ancestors, who were able, through the alignment of the monument, to capture the turning of the year, the sense of renewal and rebirth, which is an idea at the heart of Christmas. We should not be surprised, then, that the monument has become central to Christmas celebrations,” he says.

Feat of engineering
Of course, you don’t have to be interested in the spiritual leanings of our Neolithic ancestors to appreciate the monumental feat of engineering at Newgrange. The tomb sits on top of an elongated ridge overlooking a large bend in the river Boyne. The structure supports about 200,000 tons of earth and stone within its fabric and was built some time around 3,100 BC – about 600 years before the pyramids and 1,000 years before Stonehenge.

The main passageway and dome are formed from the juxtaposition of huge megaliths, quarried in Clogher Head near Drogheda, 22km away, and most likely shipped there by sea and river, and then log-rolled into position.

The stones are held in place by their own weight, each countering the force of neighbouring stones. With the help of sea sand and burnt soil to fill the gaps, they’ve kept the interior dry for 5,000 years.

The structure’s retaining wall is encircled with 97 stones, many decorated with spirals, triangles, concentric circles, arrangements of parallel lines and arcs. The most common motifs are lozenges and zig-zag chevrons. They may be Neolithic doodles, geographical maps or astronomical charts; nobody is certain.

The purpose of passage tombs such as Newgrange, and its sister sites in Knowth and Dowth, is still debated. The Neolithic era stretches from 10,000 BC to 2,000 BC, and is marked by the introduction of farming.

Farming societies
Prof Cooney says the building of monuments was one of the defining characteristics of early faming societies in western Europe. “Where passage tombs have not been disturbed and are archaeologically excavated, they have been found to contain the carefully placed, cremated bones of people,” he says. “Objects that were with the dead when they were cremated on a pyre were placed with the cremated bone. Hence the passage tombs can be seen as places where the dead from previous generations were remembered.

“The architecture and art that we find in the tombs combined to make these ancestral places of continuing importance to the living. It was central to their cosmology, their understanding of the world,” he says.

For more than 4,000 years, Newgrange lay hidden from the world until Scottish landowner Charles Campbell, who had inherited the land after the Battle of the Boyne, sent his labourers out looking for building stone in 1699. They uncovered the site, thinking at first it was a cave.

For many, the awe-inspiring feature is the structure’s solar orientation – only about 5 per cent of passage tombs are aligned to the cosmos. Because the floor of the burial chamber is two metres higher than the floor at the entrance, little or no light can reach the inner recesses for most of the year.

However, at dawn, from December 19th to 23rd, a narrow beam of light creeps slowly up along the tomb’s passageway, gradually entering the chamber and lighting on a triple spiral embossed stone at the back of the chamber.

As the sun rises higher in sky, the beam widens, illuminating the chamber. The event, which begins at 8.58am, lasts 17 minutes.

To ensure this alignment occurred, the tomb builders fitted the structure with a special roof box, located roughly 2.5m from the entrance. Excavators originally mistook this for some sort of false lintel.

Prof O’Kelly, who excavated and restored the site between 1962 and 1975, was the first to document the purpose of this roof box.

“I was literally astounded. The light began as a thin pencil and widened to a band of about six inches. There was so much light reflected from the floor that I could walk around inside without a lamp and avoid bumping off the stones. It was so bright I could see the roof 20ft above me,” he recounted at the time.

“I expected to hear a voice, or perhaps feel a cold hand resting on my shoulder, but there was silence. And then, after a few minutes, the shaft of light narrowed as the sun appeared to pass westward across the slit, and total darkness came once more.”

Prof Tom Ray, an astrophysicist in the Dublin Institute for Advanced Studies, said the Earth’s orbital “wobble” has altered the timing of the solstice event.

“You now have to wait about 10 minutes after sunrise before the light enters the chamber, but in 3,100 BC it would have been perfectly aligned with the first rays of sunrise.”

The light beam is also about one to two metres shorter, barely reaching the back wall of the main chamber, in contrast to the original orientation, he said.

Prof Ray said the structure will again be perfectly aligned with the sunrise in about 5,000-6,000 years’ time.

Who knows if the structure will still be capturing sunrise on the darkest days of the year five millenniums from now or what future generations will make of this Neolithic salute to the heavens.