After discovery of superhenge, Bradford researchers turn to undersea Doggerland 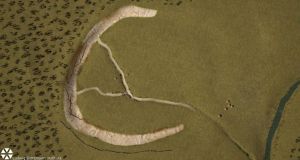 An artist’s impression of stone monoliths found buried near Stonehenge which could have been part of the largest Neolithic monument built in Britain, archaeologists believe. Photograph: EPA/Stonehenge Hidden Landscape Project

A €2.5 million study has just been launched to study the last remaining unexplored region of Europe. Known as Doggerland and about the size of Ireland, it remains hidden from us because it lies under water.

A research team from the University of Bradford hopes to fill in the missing part of European history however with a project to reconstruct the ancient land that is now beneath the North Sea.

Doggerland disappeared beneath the waves about 9,500 years ago after the climate warmed and melted vast glaciers. The rising water inundated this land bridge between Britain and the Continent, covering over the landscape and any traces left behind by the communities who lived there.

“We know we are looking at a huge chunk of land,” said Prof Vince Gaffney, Anniversary Chair in Landscape Archaeology at the University of Bradford. He presented a paper on what lies hidden in landscapes on Monday at the annual British Science Association Festival of Science.

His talk focused on Durrington Walls in Wiltshire, a Neolithic “superhenge” measuring about three kilometres in circumference. It dwarfs the better known Stonehenge which lies about two miles away, Prof Gaffney said.

The site was recently reanalysed using non-destructive techniques and discovered it, like Stonehenge, was ringed with large standing stones. Early estimates suggesting it had a ring of 90 stones have been revised upwards to about 200, he said.

He believes that similar investigation of sites at Avebury and Marden could reveal similar massing superhenges, he said.

Yet his attention now focuses on Doggerland and what it may reveal. Such monuments on land can be lost over time and traces of human use disappear.

This does not happen to such a degree with materials under water, he said. Organic material is protected by the buildup of sediments.

The European Research Council granted the group €2.5 million to delve into this strange underwater world, using advanced methods to seek out signs of human engagement with landscape.

The project will use DNA analysis and computer technology to rebuild the original landscape. Seabed cores will bring up signs of human agriculture and early animal domestication, Prof Gaffney believes, based on early findings.

There are indications of sheep present but also grain.

Trawlers have brought up tools fashioned by Neanderthals so clearly there were hunter gatherer communities living in Doggerland, he said.

The researchers acquired seismic seabed readings for 45,000 square kilometres of Doggerland and this will help decide where to look for signs of humans. “It is like a time machine the further you go back,” he said.