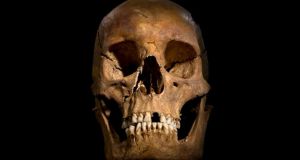 The skull of King Richard III: Scientists have announced plans to sequence Richard III’s genomes in an attempt to discover more about the 15th-century monarch, including what he really looked like. Photograph: University of Leicester/PA


King Richard III has been dead for almost 530 years, but the secrets of his genetic make-up will soon be revealed by a genome study at the University of Leicester.

The scientists expect to discover his hair and eye colour and whether he was susceptible to certain diseases. His genetic blueprint will also be compared to a matching genome from one of his living descendants.

Richard III made international headlines when the university confirmed last February that it had recovered his remains in an archaeological dig.

He died at the Battle of Bosworth Field in 1485 at the age of 33, just two years after being crowned king of England.

His resting place could hardly have been less regal. His skeleton was dug out of a council car park in Leicester, although the site was formerly occupied by a Greyfriars friary.


Genetic match
The scientists were certain the remains were those of Richard III when preliminary studies proved a genetic match between the skeleton and two of the king’s living descendants.

Ancient DNA has only been studied in a handful of individuals. These include Neanderthal specimens, the 5,300-year-old mummified remains of Otzi the Iceman, and a few others. None of these, however, were known individuals and no lineage could be established for them.

“It is an extremely rare occurrence that archaeologists are involved in the excavation of a known individual, let alone a king of England,” said Dr Turi King, who with colleagues at Leicester will do a full genome sequence using DNA-bearing samples from Richard’s skeleton. They will also do a sequence from a living relative, Michael Ibsen.

Dr King said the project should prompt discussion about how DNA informs our sense of identity, our past and our future. Once the study is complete, Richard’s skeleton and any samples will be reinterred, presumably in more kingly surroundings.

The project is funded by Prof Sir Alec Jeffreys, the scientist who invented the “genetic fingerprinting” methods used today, as well as the Wellcome and Leverhulme trusts.