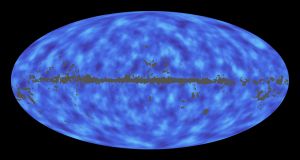 Map of Matter in the Universe: This full-sky map from the Planck mission shows matter between Earth and the edge of the observable universe. Regions with less mass show up as lighter areas while regions with more mass are darker. The grayed-out areas are where light from our own galaxy was too bright, blocking Planck's ability to map the more distant matter.Credit: ESA/NASA/JPL-Caltech 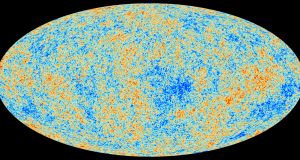 Map of heat as light left by the Big Bang: This map shows the ancient light, called the cosmic microwave background, imprinted on the sky when the universe was 370,000 years old. It shows tiny temperature fluctuations that correspond to regions of slightly different densities, representing the seeds of all future structure, the stars and galaxies of today. Credit: ESA and the Planck Collaboration

The universe was born about 100 million years earlier than previously estimated, according to scientists analysing new images of the cosmos.

The unparalleled, bird’s eye view of the universe confirms many theories about how it was formed but opens up many new questions that will be answered in the coming years.

It comes thanks to the Planck satellite, a flagship mission for the European Space Agency in collaboration with the US National Aeronautics and Space Administration. Launched in 2009, Planck has kept its two key observational instruments trained on the universe as if seen from earth.

Two new images have now emerged that have astronomers delighted and looking for more.

One map portrays how matter is distributed is across the universe, both matter we can see and so-called dark matter which is invisible to optical telescopes. The second Planck image records the very faint cosmic microwave background, the remnant heat seen as light that was left behind after the Big Bang that triggered the universe.

Together these two maps provide astronomers with hard data about why the universe is structured as it is, the ratios between matter and dark matter and also gives us a much more accurate figure for the age of the universe. The Big Bang has now been set at 13.82 billion years ago, making it about 100 million years older than previous estimates.

The age adjustment comes because the universe is expanding outwards at a slower speed than thought. This expansion of space, which acts like stretching an elastic band, was confirmed in 1929 by astronomer Edwin Hubble. The new Planck data shows that a typical distant galaxy is separating away from us at 67.3 kilometres per second, slower than previously calculated.

Heat is perhaps a misnomer for the minute temperature difference seen in the sky left behind by the Big Bang. But the Planck satellite can see this difference which is just minus 270.4 degrees, a scant 2.7 degrees above absolute zero.

Yet this reveals the hot and cold regions of the universe which in turn provide solid information about the composition and evolution of the universe. It changes all the existing numbers about the “stuff” that is out there, with ordinary matter - the stars, dust and us - making up 4.9 per cent, up from 4.6 per cent.

Much more of the universe is invisible but Planck shows that mysterious dark matter is 26.8 per cent, up from earlier estimates of 24 per cent. And dark energy, the force scientists believe is causing the universe to expand, now makes up 68.3 per cent of the universe, down from 71.4 per cent.