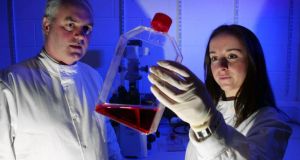 A scientist at NUI Galway has described new research in Austria as “extraordinarily exciting”, suggesting that it could lead to growing replacement brain tissue to treat conditions such as Parkinson’s disease.

The researchers in Austria have found a new way to grow brain tissue in the lab, producing three-dimensional “mini-brains” that mimic the way a brain develops naturally.

The team at the institute of molecular biotechnology in the Austrian Academy of Sciences used different types of stem cells to grow small clumps of brain cells known as “cerebral organoids”, which the researchers are calling “mini-brains”.

Most lab-grown tissues only form flat two-dimensional layers, but the researchers created conditions that encouraged the formation of several types of brain cells. These then readily formed pea-sized nodules of tissue arranged in combinations similar to those that would be found in a normal brain. Details of the work are published today in the journal Nature.

“This is an extraordinarily exciting development and a very big step forward in understanding how the brain works,” said Frank Barry, professor of cellular therapy at Galway’s Remedi, the Regenerative Medicine Institute. He was not involved in the research but knows the research group in Austria.

“If you can grow part of a human brain in this way, it opens the door to making replacement brain tissue. Take the case of Parkinson’s disease. It involves the degeneration of one particular part of the brain. This research opens the door to using stems cells to regenerating the brain by transplanting new tissue to the patient,” he said.

It brings the possibility of tissue transplantation “within reach” even if it will take time to deliver, he believes.

“Right now, we can make tiny nodules of tissue in a bioreactor. To go from there to a human treatment will take at least 10 years.”

The important benefits of being able to produce a mini-brain are here already, however. The ball of tissues can be used in different ways, to test new drugs, to learn more about how the brain develops and to study the onset of various diseases that affect the brain, Prof Barry said.

In fact the researchers already proved they can do this. Their nodules were developed from stem cells, a kind of starter cell that can change into any of the 200-odd cell types in the body.

They used stem cells originally derived from a human embryonic cell line and other “induced” stem cells where the researchers force an adult skin cell to transform back into a stem cell.

The initial nodules were made using induced stem cells from a healthy donor. They then produced nodules using induced cells from a donor who had a genetic disorder called microcephaly, a condition in which brain size is significantly reduced, the researchers said.

When they created tissue cultures with these cells, the nodules grew to a lesser size. The scientists, led by Dr Jürgen Knoblich, were able to see how the cells changed because of the genetic disorder.

“It underlines the importance of stem cell technology in understanding how tissues work and how diseases are caused,” Prof Barry said.

The nodules could also be used to identify promising drugs or to see how brain tissue connects up to produce what the researchers describe as “the most complex natural structure known to man”.

1 Quarantine process to be tightened as health officials grow nervous
2 US passengers fly into Dublin: ‘I’m here for six days. I guess I’ll have to stay inside’
3 Back with our old friends at eir – and nothing seems to have changed
4 ‘I thought it was a hoax’: Patient dies after Texas Covid party
5 White House turns its fire on Anthony Fauci over Covid-19 comments
Real news has value SUBSCRIBE