Research riches: what we get for our money

What does the taxpayer get for funding research, you ask? Three researchers talk about their work on disease-resistant crops, better online video-streaming, and technology to aid faster wound-healing 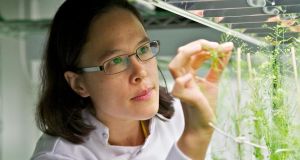 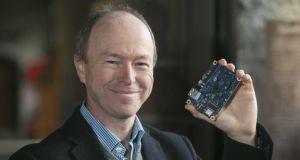 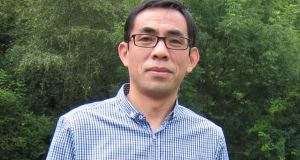 Dr Wenxin Wang, who is working on an artificial skin that can help speed up the healing of wounds

Each year, millions of euro of taxpayers’ money flows into scientific research. Announcements are made and pictures are taken. But what happens with all of the money?

The Government invests about €350 million a year in research, most of which goes to the third-level institution labs, and major research centres such as Tyndall National Institute in Cork or the Crann nanotechnology centre at Trinity College Dublin.

The public funds do not just disappear into the laboratories. They support thousands of scientists working in a wide range of areas, for example cancer and Alzheimer’s, nutrition and food safety, renewable energy and information and communications technology. It keeps the big labs running but also provides start-up support for young researchers via the Irish Research Council, for example.

The money flows into producing highly trained and capable scientists and into the labs they need to make important discoveries. The human and financial resources combine to deliver findings that can be used to improve medical treatments, to advance world knowledge about, say, how the universe formed or to develop new technology that can be turned into jobs and wealth through commercialisation.

Public funding is essential to sustain this work. Having a strong research base also helps attract foreign direct investment from companies that rely on technological developments to sustain their businesses.

That is why reducing the State spend on research represents such a false economy. It causes negative effects that work against the positives and damage our reputation abroad as an advanced, forward-thinking economy driven by the advance of knowledge.

So what do we get for our money? Quite a lot. Following are a few examples of researchers who earned a share of €47 million awarded earlier this year under the Science Foundation Ireland Investigators Programme.

For Dr Emmanuelle Graciet, it was about trying to find a way to counter plant diseases and, in the process, come up with a superfit turnip. “I work on plant biology, and what I am really interested in is how plants resist disease.”

She is based at NUI Maynooth, and she received €715,000 to develop a way to build better disease resistance into food crops to boost yields and reduce losses. The method has to avoid genetic engineering given consumer resistance to modified foods. She has been looking at an interesting “pathway” in a plant that is often used in the lab called arabidopsis. Changes take place in the plant when it is challenged by a fungus or bacterial infection that seem to help it cope with attack.

She wants to learn exactly what is happening with a view to reproducing this pathway in the turnip. The goal would be to boost its disease-resistance and see what other crop plants might be improved in this way. Rapeseed is next in line. “If we manage to have plants that are more resistant to pathogens, farmers will not have to spray so much, so it is better for the environment, gives higher yields and is cheaper to grow,” she says.

Dr Wenxin Wang is based at UCD. He is working on an artificial skin that can help speed up the healing of wounds in diabetics, but more particularly in those with the inherited disease recessive dystrophic epidermolysis bullosa. Those with the condition have skin that lacks reinforcing collagen and tears at the slightest touch, leaving them covered in dressings.

“I am trying to develop a skin substitute for wound-healing for those with these conditions,” says Dr Wang. “We have developed polymers with biological content, collagen, that can be combined to make a scaffold that can be applied to the skin.”

The scaffold could be used to deliver drugs or stem cells or even new forms of genetic treatments. “That is why we combine synthetic and biological material,” he says. “It contains polymers that hold it all together, providing enough strength to seal the wound but also therapeutic genes and living cells to provide the biomolecules needed to accelerate the wound- healing.”

The skin substitute could be used in the treatment of burns. He believes the technology would go into widespread use “if it can be shown to work” and remains “quietly confident”. His €1.18 million award will sustain the research over five years but also produce another major benefit of State support: he will be able to hire graduates and postdoctoral students.

Those annoying delays while waiting for a video to download when on the internet may become a thing of the past because of research work under way here.

Prof Cormac Sreenan, left, of University College Cork received funding of €1.2 million from Science Foundation Ireland to tackle those playback starts and stops. He is developing ways to make the communication networks smarter in order to streamline the movement of data from point to point.

“Today’s internet was never designed to cope with some of the applications it must cope with today. The most significant is streaming video,” says Sreenan. “Ten years ago video traffic was very small, but today it accounts for 60 per cent of all traffic on the internet.”

Demand for services such as Netflix and YouTube “eats network capacity”.

He plans to use “software-defined networks” that let you control the movement of data. “The software will talk to servers for instructions on how to optimise the data flow.”

Opening up this flow will make users happy, and will do the same for network providers who will be able to push more data over fewer lines. It should also satisfy streaming video service providers.

There is a real need for this with the move to high-definition streaming, says Sreenan, who is UCC professor of computer science and founder of the Mobile and Internet Systems Laboratory there.