Ravens will move food if spying is possibility, study shows 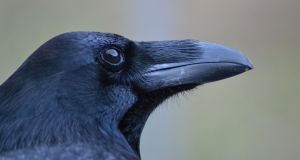 Nevermore will this raven’s food be stolen. Photograph: Jana Mueller/PA

Ravens can assess the risk of being observed when hiding food and will change locations of a food cache if they think another raven has been spying on them.

This seems a uniquely human capacity, to predict how another individual is thinking, but ravens can do it too even if the competitor ready to steal the food is hidden from sight.

Some animals may appear to have this skill, but it is difficult to prove, says Thomas Bugnyar and colleagues from the University of Vienna.

One bird may be responding to gaze clues rather than mental state, for example noting the line of sight of a another raven scoping out the hidden food.

To get around this the researchers trained ravens to use a peep hole to spy on one another. Sometimes the peep hole would be open and other times not, but the birds knew what another spying bird could see.

If a raven busy hiding food suddenly sees a possible thief it will change its behaviour in the sure knowledge it is being observed.

But the same evasive action occurs if the view is blocked other than through an open peep hole and the recorded sound of a raven is played. The raven making the cache knows it is probably being observed through the spy hole and acts accordingly.

It does not hesitate to hide food when it sees the peep hole is closed however and proceeds as if hidden from view even if it can hear a competitor in the other chamber.

“This strongly suggests that ravens make generalisations based on their experience and do not merely interpret and respond to behavioural cues from other birds,” the authors write in the journal Nature Communications.

This mental capacity is described as “theory of mind” and until now had only been seen in humans and non-human primates, the authors write.

“These findings confirm and unite previous work, providing strong evidence that ravens are more than mere behaviour-readers,” they write.