Scientists at Queen’s University Belfast have made a breakthrough in the fight against a hospital superbug which killed four babies. Photograph: Alan Betson/The Irish Times. 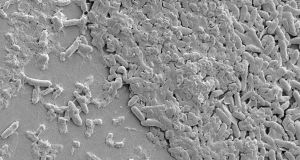 Researchers at Queen’s University Belfast have synthesised a new hydrogel capable of destroying some of the most potent hospital superbugs.

“Superbugs” is the common name given to bacteria that can resist the action of several antibiotics. “They can attach themselves to medical instruments and implants by growing a biofilm. This is a jelly-like coating which protects them from the action of antibiotics,” explained Dr Garry Laverty, a lecturer in Pharmaceutical Sciences at Queen’s University.

Together with colleagues at Queen’s and Brandeis University (US), he has designed a new type of hydrogel that can kill rapidly common superbugs such as E. Coli, Staphylococcus and Pseudomonas aeruginosa.

Dr Laverty pointed out the gel “is made from peptides, the natural building blocks of proteins. These molecules are smaller than the protective biofilm of the superbugs, and are inherently anti-microbial.”

By breaking down the coating, they are able to kill the bacteria selectively, leaving healthy cells unaffected, he said.

The results of the study are published next month in the journal Biomacromolecules.

Dr Laverty hopes the gel will stir interest from the pharmaceutical industry for the coating of medical equipment such as catheters and hip replacement parts prior to surgery.

“Our gel would prevent the current only option [when a superbug is found on implants], which is to remove the medical implant, leading to further pain and discomfort for the patients.”

Pseudomonas bacteria can grow deep inside the body in medical implants and are highly resistant to treatment.

Caolan Burke was born at Altnagelvin Hospital in Derry in December 2011 but died there 10 days later after contracting pseudomonas.

In 2012, the deaths were investigated by the Regulation and Quality Improvement Authority, which linked the bug to water from contaminated taps in hospital neonatal units.