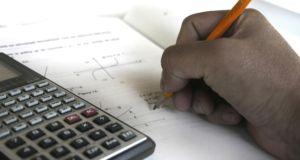 Students studying under the Project Maths curriculum have recorded a “small but positive” improvement in their skills with the subject, a new study has shown. Its authors also suggest that these gains will advance further over time.

The results show a relatively small change but it will be strongly welcomed by the Department of Education which introduced Project Maths back in 2008. There had been little hard evidence that the curriculum was having an impact but the study by the Educational Research Centre within the Department points towards an improvement in student performance.

The study also showed a stronger performance by Irish students studying Project Maths on Pisa questions dealing with space and shape, an area in Pisa that has typically seen a weak Irish performance.

The replacement curriculum was introduced to get students away from the rote learning of maths, encouraging them to learn the mathematical concepts and apply these in solving real-life problems.

Pisa questions also assess how students apply mathematical concepts in real-life contexts, something that should be a help if Project Maths actually was having an impact.

It was still early, however, and this kind of initiative could take several years to show an impact, said Dr Brian Merriman, one of the authors of the new study.

“The gains noted in the current study are small but encouraging and suggest that over time Project Maths can be expected to improve student performance in mathematics at all levels,” Dr Merriman said. There are 800 events taking place around the country as part of Science Week 2014 including talks, displays, exhibitions and shows. Full details at science.ie