Judging of exhibits created by up to 1,200 students aged 12 to 18 begins today 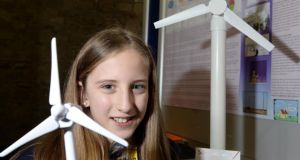 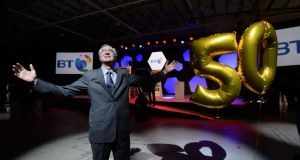 John Monahan, the first ever winner of the Young Scientist exhibition in 1965 at the RDS today in advance of the official opening tomorrow. Photograph: Alan Betson/The Irish Times. 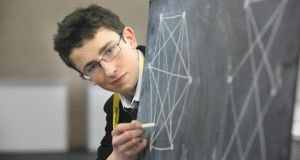 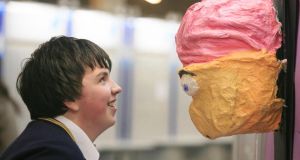 Conor Walsh (16) from St Fintans High School Dublin with project to investigate whether there is a link between brand loyalty and age. Photograph: Gareth Chaney/Collins 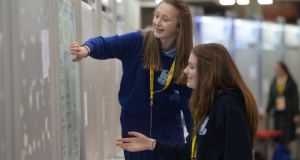 Emma Collins, and Maeve Walsh from Malahide Community School assembling their project on “The Effcts of Social Media on Teenagers”. Photograph: Alan Betson / The Irish Times

Judging in the 50th BT Young Scientist and Technology Exhibition gets under way today as almost 1,200 students aged from 12 to 18 descend on the RDS.

President Michael D Higgins officially opens the exhibition this afternoon amidst a heightened air of expectation in this important anniversary year.

From early this morning students will be streaming into the RDS and setting up the 550 projects on display this year. Record numbers of student projects were entered, with 2,000 applications coming in from across the island of Ireland.

The need to shortlist these to the maximum 550 projects ensures that standards are once again extremely high with only the best research projects making it through to the final. There will be plenty to see for the estimated 40,000 visitors expected to come through the RDS turnstiles when the event opens to the public tomorrow.

“It is absolutely spectacular, it has grown so much since my last visit 10 years ago and is much bigger than the first Young Scientist back in 1965,” said John Monaghan, who five decades ago won the inaugural Young Scientist exhibition. “The sheer scale of the event is overwhelming,” he said.

“The most important component of it is the effect it has on the young people and students in getting them interested in science,” Mr Monaghan added. “That is the most important thing. Who actually wins really is only a small part of the overall event. Somebody has to win, but every one of the participants is a winner because of what they get from the event.”

Dr Tony Scott, who co-founded the exhibition with Fr Tom Burke, also stressed the importance of student participation. “For me, the 51st Young Scientist will be equally as important as the 50th. I see the 50th as a milestone that leads on to its future development,” he said. “My overall feeling on the 50th anniversary is pleasant amazement. It has survived so long and has been very successful thanks to the young people, their parents and their teachers.”

BT is the main sponsor but also the organiser of the exhibition. “It is a daunting thing to do to have the responsibility of sponsoring the 50th anniversary of such an important national event,” said the company’s chief executive, Colm O’Neill. “Because we organise the event rather than just sponsoring it we feel a great sense of duty to try and put on the best BT Young Scientist there has ever been.”

The student projects on display from today through Saturday are divided into four categories including the physical sciences and maths; technology; biological and ecological; and social and behavioural. The judges will visit each stand several times, encouraging the students to explain their work and why it is important.

The opening ceremony with the President will be streamed live over the official website, btyoungscientist.com starting at 2pm. Judging begins immediately afterwards and continues through Friday. The event opens to the public Thursday through Saturday and closes Saturday evening.

Tickets cost €6 for students and €12 for adults, family tickets cost €25 for a family of four. Secondary school student groups of more than 20 cost €4.50 each and similar primary school groups are €4 per pupil.