Plight of the bumblebee: climate change puts insect at risk 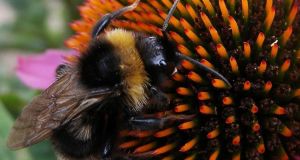 Bumblebees in Europe and North America may be heading for a wipeout as a result of climate change. They are not migrating northwards to keep in temperate conditions. Photograph: Nick Ansell/PA Wire

Bumblebees in Europe and North America may be heading for a wipeout as a result of climate change. They are not migrating northwards to keep themselves in temperate conditions and are dying out in the overheated south.

Canadian and US researchers tracking them say the insects, vital for pollinating our food crops, have already lost 300km from the southern fringe of the range in which the can live. And things can only get worse for them as average temperatures rise.

“About a third of all bee species are threatened with extinction here,” she said. The insects are loosing the battle against habitat loss caused by humans.

The bees and other pollinator insects are essential as food crops and wild plants often can’t pollinate themselves. “It is about the services they are providing, it is worth €53 million a year in services to agriculture,” Dr FitzPatrick said.

The very real threat to bumblebees over wide swaths of the northern hemisphere is apparent in the study led by Jeremy Kerr from the University of Ottawa and colleagues. The results are published in the journal Science.

They used historical data covering 110 years up to 2010 collected in Europe and North America looking at 67 bumblebee species. Their database holds about 423,000 observations.

They also took into account non-climate factors such as land use and pesticide application. They found the bees did not advance northward as temperatures rose over the period by about 2.5 degrees. This was true for both continents.

But because the bees are not moving away from areas that have become too warm for them, their total range is now shrinking and by a measurable amount.

Warming has shrunk their southern range limits by about 300km. So the band the bees can successfully occupy is getting narrower all the time, the report’s authors say.

The researchers do not know why the bumblebees have failed to shift their ranges north, but their behaviour increases their vulnerability to climate change, the authors say.

In Ireland the bumblebees are on the move, but in a westerly direction, Dr FitzPatrick said.

“There are 20 different bumblebee species in Ireland. Their range change is to move west due to loss of habitat in the east and centre of the country,” she said.

“The Burren is far and away most important habitat for them at the moment.”