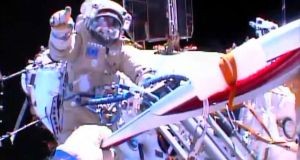 The Olympic torch that will light the flame in the upcoming Winter Olympics 2014 has just completed an unusual leg of its journey – into space.

The unlit torch arrived at the International Space Station last Thursday before returning to Earth along with three ISS crew members earlier this week.

It’s not the first time an Olympic torch has headed for space – there were trips aboard space shuttles in1996 before the Atlanta Olympics, and in 2000 before the Sydney Olympics – but this time the torch went the extra mile: two Russian cosmonauts brought it out on a spacewalk and passed it between them.

The cosmonauts, ISS flight engineers Oleg Kotov and Sergey Ryazansky, took the Olympic torch out for its foray into space on November 9th at the start of a spacewalk and got the snaps done before getting on with the maintenance jobs.

“After Kotov and Ryazansky completed their photo and video session with the torch outside the station, they stowed it back inside the airlock and proceeded with the remainder of their chores 260 miles above the Earth,” states Nasa’s website.

The torch hitched a ride back to Earth aboard a Soyuz spacecraft with three returning ISS crew members and landed in Kazakhstan. It will be used to light the Olympic flame in February next year at the opening of the Winter Olympic Games in Sochi, Russia.