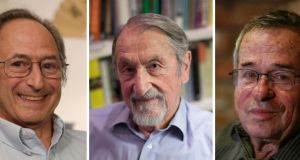 Michael Levitt, Martin Karplus and Arieh Warshel, the three laureates of the 2013 Nobel Prize for Chemistry.

Three chemists who revolutionised the use of computers to model chemical reactions have won the Nobel Prize in Chemistry for 2013. They developed methods that allow chemists to detail the step by step changes as chemicals interact in fractions of a millisecond. They also introduced ways to merge traditional physics with quantum physics, the science that applies at the level of atoms.

Martin Karplus of the Université de Strasbourg and Harvard University, Michael Levitt of Stanford University and Arieh Warshel of the University of Southern California, Los Angeles, shared the €930,000 prize announced yesterday in Stockholm by the Royal Swedish Academy of Sciences.

‘Ground-breaking’
The academy described their work as “ground-breaking”, laying the foundations for the powerful programmes used to predict chemical processes at an atomic level. They did this by merging the two forms of physics, the academy said. Traditional physics helped chemists to model large molecules, but building in quantum physics allowed the models to predict the minute steps within a reaction as it was happening. This also meant small molecules could be analysed as they interacted with large ones.

“It is a really well deserved prize for the three chemists,” said Prof Pat Guiry the head of school of chemistry and chemical biology at University College Dublin.

Physical reaction
With classical physics it is simple to model large molecules such as proteins but not to show how a physical reaction occurs. “Bonds break and reform in milliseconds,” Prof Guiry said. “In order to see that, you need quantum physics but this can only be carried out on small molecules. By using both you almost have the best of both worlds. There is not a pharmaceutical company in the world not using this technology.”

Levitt said the award recognised him for work he had done when he was 20, before he even had his PhD. “It was just me being in the right place at the right time and maybe having a few good ideas. It is sort of nice in more general terms to see that computational science – computational biology – is being recognised,” he said.

“It’s like seeing a watch and wondering how actually it works,” said Warshel when talking to reporters in Stockholm by phone. “You can use it to design drugs, or in my case, to satisfy your curiosity.”

1 Coronavirus: No new Covid-19 deaths reported in State for first time since March
2 Coronavirus: What will reopen in Ireland’s phases to ease restrictions and what are the dates?
3 Archaeologists are ‘quite sure’ they have found Red Hugh O’Donnell’s burial place
4 Man jailed for three years for ‘barbaric’ circumcision without anaesthetic
5 Unconvincing account may take some heat out of Dominic Cummings controversy
Real news has value SUBSCRIBE