National cat survey: the results are not all black and white

Survey of fur colour via irishtimes.com finds black with white patches is most common. And there’s more 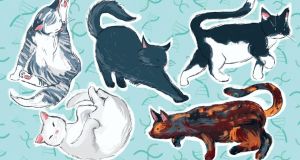 Every country has a top cat, and for the island of Ireland, that cat is mostly black with mixed patches of white.

This colour is the most common in each of the four provinces, but the value of this information goes far beyond colour. If we know a cat’s fur colour, we also know its genetic background.

The identification of the most common feline comes from a national survey of cat colour organised by The Irish Times in collaboration with a geneticist based at Trinity College Dublin.

Importantly, all of the data – information on the coat colour of more than 10,000 cats from all 32 counties – was submitted to the survey by citizen scientists, who logged information about their own and neighbouring cats.

“I am really pleased at the response, pleased to see how many people were willing to get involved in science in this way and provide data,” says Prof Aoife McLysaght of Trinity.

She designed the online survey and has provided a preliminary analysis of what the results tell us about Ireland’s cat population.

The object of the survey was to collect information about coat colour, because if you know a cat’s colour, this immediately informs us about its genetic make-up.

Human hair or eye colour depends on hundreds of genes, but only a few genes control the colour of a cat’s fur. And a great deal is known about the genes responsible for this, says McLysaght, who leads a research group focusing on evolutionary patterns in animal genomes.

Knowing what genes are involved does not tell you anything, however, unless you have this information for a collection of cats. The survey provides this information, which is available to anyone who wants it.

So what does it tell us? Quite a lot, even after a quick analysis, says McLysaght. Simple counting would show the most common cat is black with white patches. The two rarest cat types are the pure white long-haired cat and the hairless Sphynx cat. There are about 100 long-haired white cats here, and, on the basis of typical gene frequency, this matches expectations, says McLysaght. Just six Sphinx cats were logged, but there are likely more here, she believes.

Differences can emerge, too, if you compare a county’s most common cat with cats from a small town or village within that county. “You could have clusters if you had a number of, say, orange cats breeding with orange. Cats do wander a bit,” she says.

It is possible to learn about how genetic inheritance works by using the data, says McLysaght.

The same thing takes place in humans in the case of colour-blindness, she says. The gene that causes colour-blindness sits on the mother’s X chromosome, and so men are 10 times more likely to be colour-blind than women.

Studying cat populations in this way helped earn Dr Andrew Lloyd, a lecturer in the department of science and health at Institute of Technology Carlow, a PhD in the 1980s. The survey contains loads of data that can be analysed, he says.

“It serves as a fantastic resource for critical thinking. The concepts are so simple you could do a study as a Young Scientist project. You could use it as a tool to explain gene frequency or evolution, but also questions about overall genetic make-up – for example, looking for the greatest level of difference between two counties and seeing how this relates to geographic distance,” he says.

Would you like a copy of the survey data online as an Excel file? If so, read this story on the science page at irishtimes.com/science

TORTOISESHELL SHOCK: THE SURVEY’S FLAW “This cat survey data has value, and one of the good things about it is it is flawed in certain ways,” says Dr Andrew Lloyd of IT Carlow. “As a scientist you have to address this issue: do you bin it or make informed decisions about where the problems lie and can you get around them?”

The problem relates to tortoiseshell-coloured cats, says Prof Aoife McLysaght of Trinity College Dublin. Because of genetics, tortoiseshell cats can only be female, but some were declared as male on the survey. They must be female because of the rules of genetic inheritance. The orange fur colour comes from a gene inherited from a female sex chromosome, and, while females can have two inherited orange genes, males can have only one. Males can have either black fur or orange fur but not both. Advanced genetic analysis comes into play at this stage. “You can do some genetic algebra on the data, looking for orange on males and then working out the gene frequency in males to calculate the expected number of tortoiseshell cats,” says Dr Lloyd.