Moving the needle: new fronts in the fight against diabetes

The growth in diabetes has become a worldwide epidemic, and research has moved on to advanced transplant techniques and stem cells 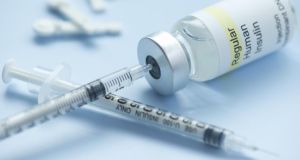 About 190,000 Irish people are thought to suffer from diabetes, and that number is expected to rise. Photograph: Thinkstock

Ireland is taking an increasingly active role in diabetes research, helping to drive some of the latest technologies and winning a greater share of research funding.

This greater involvement is partly because of the rapid rise in the incidence of diabetes here and abroad. The modern growth in diabetes has become a worldwide epidemic, according to the World Health Organisation, and Ireland has not been spared.

About 190,000 Irish people are thought to suffer from diabetes, and that number is expected to rise to a quarter of a million in the next 15 years, says Diabetes Ireland.

The latest research involves advanced transplant techniques and stem cells. One strategy is the EU-funded Diabetes Reversing Implants with Enhanced Viability and Long-term Efficacy project (Drive). The project, worth almost €9 million, hopes particularly to help those with Type 1 diabetes, which affects roughly 30,000 people in Ireland.

The pancreas is involved in producing the hormone insulin, a chemical that tells the body’s cells to absorb sugar for energy. Type 1 diabetes is caused by the body’s immune system attacking the pancreatic and kidney cells, lowering insulin levels. The aim of this new research is to introduce fresh clusters of healthy pancreatic cells, says Dr Garry Duffy, a researcher at the Royal College of Surgeons in Ireland and co-ordinator of Drive.

Current techniques involve simply injecting donated healthy cells into an abdominal vein, but this technique has complications. Many of the cells are washed away by the body, and the cells must be protected by suppressing the immune system. “You deliver systemically, so you’re shutting the immune system down throughout the body,” says Duffy.

Drive aims to solve both problems by packaging healthy cells in micro-capsules and then inserting them into a fold of tissue in the abdomen. This procedure gives cells something to attach to when supplying natural insulin to the patient. The capsules also deliver a far more localised immuno-suppressant. “I think that’s the big difference with our programme,” says Duffy.

“It’s great seeing any type of research being funded,” says Dr Anna Clarke of Diabetes Ireland. “Breakthroughs can happen very quickly at times. That’s the whole thing about research at this level: you don’t know which will be the winner.”

Two other international projects being led by researchers in Galway look to use stem cells to renew tissues damaged by type 1 diabetes. The group will use stromal (connective) stem cells to “arrest, and hopefully reverse, the complications of diabetes,” says Prof Tim O’Brien, director of Galway’s Regenerative Medicine Institute (Remedi) and co-ordinator of the project.

After winning €6 million in EU funding in 2012, the team were awarded a further €6 million to bring their research to clinical trials. One such trial looks to see if purified stem cells injected into the body will help protect kidneys damaged by diabetes. “We are confident that by harnessing the most modern approaches in stromal cell therapeutics there may well be a way to halt the progression of diabetic kidney disease,” says O’Brien.

Another approach, at University College Dublin, looks into how the stomach and brain communicate after gastric bypass surgery. “What we want to understand is how we can use the normal signals between the gut and the brain to help these patients” says Prof Carel le Roux from UCD’s Conway Institute.

The surgical procedure involves reducing the stomach’s size so that, when people with obesity eat a meal, their stomach fills up and sends the “I’m full” signal to the brain faster.

Prof le Roux’s research looks to replace that surgical bypass with a medical bypass, using medication to achieve what’s usually done in surgery. The research aims to find these types of signals for the kidney and to deliver them through medication instead. “Most people don’t want an operation,” says le Roux, “so if we know how the operations work, we can actually back- engineer it.”

So can Ireland claim a top spot in diabetes research today? Maybe not yet, but we’re getting there. “We punch above our weight,” says le Roux.

“I think what we have, especially on the kidney side, is the most functional networks.” Having researchers “who really get on” is helping Ireland’s reputation in diabetic kidney disease, and so we are “moving the needle” on worldwide research.

Dr Clarke agrees that our collaborative attitude is helping to improve our reputation abroad. “It was great to go out there and find partners with mutual interests. It actually made it quite easy for us to go and find partners based on that reputation.”

MENTAL TOLL: THE ROLE OF PSYCHOLOGISTS

While researchers work to improve the physical effects of diabetes, one factor is often overlooked: the psychological toll it takes on patients.

“A question I’m regularly asked is: why is there a psychologist on a diabetes team?” says Vincent McDarby, a psychologist who works with diabetes patients in Our Lady’s Hospital for Sick Children, Crumlin. The answer relates to the constant psychological burden put on patients to control their symptoms. “When you walk out the door, you’re told, ‘Don’t forget to take your insulin, don’t forget to take your blood sugar, don’t forget your diet. It’s relentless,” says McDarby.

Perhaps it’s no surprise, then, that a 2013 report found that young Irish adults are increasingly frustrated with the lack of any psychological support in diabetes care, with many of them turning to social media to find the support they need.

Research conducted by McDarby has found there is potential for psychologists to engage with social media, and he is pioneering efforts to bring more healthcare professionals online to improve support.

“From a resource point of view, it’s not practical to see people more than once every three months,” McDarby says. “This is a way of providing a higher level of contact.”

Social media allows patients to discuss their condition with other diabetics, while healthcare professionals can shed light on the latest developments in treatments.

“What we do know is, the more contact you have the better your management [of diabetes].”