Scientists used video images of marmosets demonstrating different foraging techniques to investigate what wild marmoset monkeys learn from others. Marmosets who watched the images were more likely to copy the techniques they saw.

A new study has found Goffin’s cockatoos can learn how to make and use wooden tools from each other. Here, cockatoos Dolittle and Pipin demonstrate their own tool use techniques after watching their friend Figaro. Video: Univerisity of Oxford

A new study has found Goffin’s cockatoos can learn how to make and use wooden tools from each other. Here, Figaro teaches Kiwi how to retrieve a snack by making a wooden tool. Video: Univerisity of Oxford 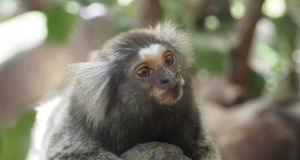 Training videos produced in Vienna were played to marmoset monkeys in Brazilian rainforests.

Old dogs aren’t the only ones learning new tricks. Researchers have shown that monkeys in the wild can watch “educational” videos and learn new ways to find food. And in a separate study cockatoos readily learned how to make wooden tools and use them to get a treat.

Dr Tina Gunhold of the University of Vienna travelled to the rainforests of Brazil to see if her training videos produced in the lab could teach wild marmosets how to open up a container to get food.

The marmosets filmed in Vienna already knew the trick of cracking open the “artificial fruit”, but were strangers to their cousins over in Brazil, explained Dr Gunhold, first author in a paper published this morning in the Royal Society journal Biology Letters.

Like in any classroom, some monkeys didn’t pay attention to the “teacher” so didn’t learn how to get the treat. But those who did quickly learned how to retrieve the reward, Dr Gunhold said. The malcontents at the back of the class still benefited, though, by later imitating the successful monkeys and managing to get the treats. The tests involved scientists from University of Vienna, Oxford and Max Planck Institute.

The cockatoos were also good students but had a live teacher, another cockatoo who had learned how to make tools to get out-of-reach food. A “role model” named Figaro formed wooden pieces into a makeshift rake and once some of the others saw it, they were soon copying his designs.

This study also involved researchers from Oxford and Vienna and appears in Proceedings of the Royal Society B.