Minister signals ban on fracking to continue in Ireland 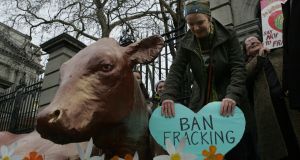 People from Leitrim on a protest at the Dáil against fracking in their area. Photograph: Cyril Byrne

The prohibition on fracking is to continue in Ireland. Fracking is the extraction of natural gas by pumping high pressure water and chemicals into shale formations deep underground.

Environmental groups welcomed the decision of the Minister responsible for the area, arguing that the activity represented a substantial risk to health.

The report noted many of the environmental problems related to the process could be overcome. But its authors also stated there were three important areas where there was too little information available to ensure the protection of human health. Until this information gap is filled, fracking should not be allowed to proceed, the report stated.

The findings “justify the continuing prohibition on the licensing of hydraulic fracturing”, said Mr Naughten.

The report would be referred to the Joint Oireachtas Committee on Communications, Climate Action and the Environment for consideration, he said.

“I hope this will assist at the committee stage debate of the proposed hydraulic fracturing legislation to be progressed by the Oireachtas next year.”

The report makes clear that human health and the quality of the environment could be kept safe if Ireland was to begin fracking. But there were three areas where more data was needed before companies could receive permits to frack, the report noted.

Fracking has created considerable controversy internationally over fears it could contaminate groundwater supplies and wells, cause the discharge of poisonous chemicals and lead to the release of methane, a greenhouse gas.

Protest groups have exerted pressure on the Government to ban it. The previous administration asked the EPA for a report on the practice, which was published on Wednesday.

The report’s authors were confronted by two pivotal questions: can fracking be carried out on the island of Ireland while also protecting the environment and human health? And what is the best environmental practice being applied internationally by those conducting fracking operations?

The group conducting the research represented a consortium involving companies, academics and government bodies. It was carried out on an all-Ireland basis.

Overall, the analysis concluded many of the activities associated with fracking “could proceed while protecting the environment and human health, using the best practices and applying the current regulations, together with a small number of additions and modifications complemented by adequate implementation and enforcement”.

The authors found, however, there were important gaps in the information and more research was needed to ensure safety for humans and the environment. These gaps prevented “a conclusive assessment of their consequences and these would require clarification before environmental protection and human health can be ensured”.

The gaps related to the failure of wells causing discharges into the environment and the possibility the fracking process would open up breaks in water-bearing rocks, allowing pollution to reach groundwater sources.

A third area of concern related to emissions of gas, mainly methane, from closed wells that over time started to leak.

The Environmental Pillar, a coalition of 28 groups, welcomed the decision by the Minister to support a prohibition on fracking based on the EPA report.

The research did not actually address many of the big concerns people have with fracking, said Friends of the Irish Environment.