Delaying retirement, taking exercise and fidgeting while sitting might contribute to good health 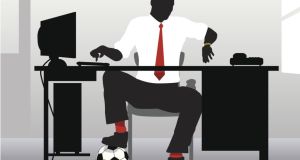 Today I would like to share some surprising tips with you about how to achieve and maintain better health. Firstly, don’t be in any hurry to retire from work. Secondly, minimise the amount of time you spend sitting each day. Thirdly, fidget when you are sitting.

Most people look forward to retirement, savouring the thought of getting off the treadmill and enjoying a permanent holiday from work.

However, a study just published on its website by the US Centre for Disease Control and Prevention (CDC) reports that retiring from work too soon is detrimental to your health.

The CDC surveyed about 85,000 people aged 65 and older over a 15-year period. A typical participant in the study was 75 years old and retired from work, but about 10,000 participants were still working.

Sixty per cent of those still working were in white-collar positions, and 20 per cent in blue-collar jobs.

This study showed that over- 65s who are unemployed or retired are almost three times more likely to report poor health than those employed in white-collar positions.

The authors concluded that “being unemployed/retired is associated with the greatest risk of poor health across all health status measures, even after controlling for smoking status, obesity and other predictors of health”.

I would guess that social contact contributes significantly to this correlation between early retirement and ill health.

The quality and quantity of many peoples’ social contacts declines when they retire, and this effect is probably greater if you retire earlier.

Loneliness is well-known to have a corrosive effect on health.

Aerobic exercise – brisk walking, running, cycling and so on – works your heart and lungs, and there is copious evidence that it is good for your health and reduces the likelihood that you will develop heart disease, obesity, diabetes and high blood pressure.

However, you also exercise throughout the day as you go about your ordinary activities – walking about the house, vacuum-cleaning, washing dishes and so on.

This general-movement exercise seems to be much more important than we had previously thought.

Conversely, complete inactivity seems to be much more corrosive on our health than we previously thought, a sobering consideration since many of us sit at our office desks for eight hours a day.

Another study showed that the benefits you receive from aerobic exercise are diminished by intervening bouts of sitting.

The solution is to stay active. You could dispense with your desk altogether and stand at a workstation, but this is a bit extreme for most people.

A simpler solution is to rise from your desk at least once every half hour and stroll down the corridor.

The latest study, of 12,778 British women aged 37 to 78, reported in The American Journal of Preventive Medicine on September 23rd by Janet Cade and others reports that even fidgeting may reduce the negative effects of sitting for long periods.

The women recorded their average sitting time per day and scored the amount they fidgeted on a scale of one to 10.

They were divided into three groups – low, middle and high fidgeters – and their smoking, drinking and exercise patterns were monitored from 1999 to 2002.

The women were followed up in 2014. Women who sat for seven or more hours per day were 30 per cent more likely to have died compared with those who sat for five or fewer hour, but only for women in the low-fidgeting group.

Middle- to high-fidgeting women showed no greater risk of dying when they sat longer.

So then: delay your retirement, take regular breaks from sitting to stroll around and fidget like hell when you are sitting.