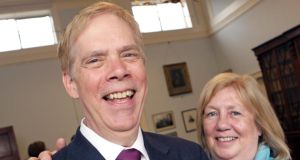 Dick Ahlstrom: pictured with his wife, Bríd, has been honoured for his contribution to science journalism.

The science editor of The Irish Times, Dick Ahlstrom, has won a major accolade for his contribution to science journalism, the Lifetime Achievement Award from the Association of British Science Writers (ABSW).

Mr Ahlstrom was named as the 2013 recipient at an event that also announced the category winners of the ABSW Awards for Britain and Ireland 2013. The awards have been open to writers in Ireland since 2010.

The Lifetime Achievement Award honours those who have made
“a massive contribution to science journalism”, according to Connie St Louis, president of the association.

Mr Ahlstrom was appointed science correspondent for The Irish Times in 1986 and has been science editor since 1997.

He edits the weekly Science Today page and is involved in initiatives to promote public engagement with science.

He has honorary life membership of the Royal Dublin Society and is an honorary fellow of the British Association of the Advancement of Science.

He was “surprised and delighted” at the news.