Layer by layer: how Siobhán McDonald paints like a geologist

Siobhán McDonald was torn between careers in science and art, but her exhibition at UCD has enabled her to combine both 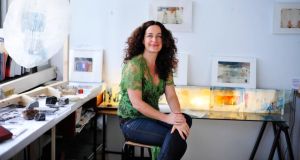 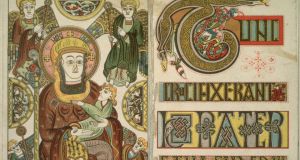 A detail from The Book of Kells, which was created on vellum by Irish monks. Photograph: Hulton Archive/Getty Images.

Methods used by Irish monks in AD 500 to write and embellish their manuscripts are finding new use in the creation of modern art. Burned bone, crushed rock and iron gall ink are all being used to express the geological rhythms of the earth in an exhibition that opens at University College Dublin on Saturday.

The large-scale commission is being developed by Siobhán McDonald, who, when she was a child, was torn between a career in art and the sciences. “I loved geology and collected rocks but ended up in art,” she says. Her exhibition, to be installed at the entrance to the Science Centre at Belfield, will show that she is still strongly allied to geology, with UCD geologists helping her prepare the materials used.

Aimsir: Red Rain and Showers of Honey – What the Irish Annals Can Tell Us About Life

The pieces on display represent a true crossover between art and science, with a strong grounding in early medieval Irish history. “I wanted to give them something with history and the past but with a link to modern science,” says McDonald, the associate artist-in-residence at the school of science at UCD. For this reason the Irish annals and a set of 350-million-year-old Irish coral fossils from the geology department are key components of her display.

The Irish monks started their Irish annals in AD 500 and continued them for centuries. Their record of life at the time provides information about the weather, politics and major monastic happenings, she explains.

McDonald decided to use vellum – fine calf skin of the type used by the monks who scribed the Book of Kells – as her foundation, then began to acquire the colouring agents used by the monks for her own work. The geologists were central to this, helping her prepare minerals including cinnabar for brilliant red, azurite for blue and alabaster white.

“This is how the monks made paint,” she says. “I am like a geologist in a way: I paint in layers and layers of rock.”

While researching the Irish annals McDonald came across the work of Prof Francis Ludlow, a Trinity College Dublin graduate now based at Harvard. He had studied the annals in fine detail, looking for evidence of major weather events in the past. He found a number of examples, often described in startling detail such as the annals’ reference to the winter of 855/856, says McDonald. “Famine and pestilence prevailed in Ireland for three years so that man ate man.”

The title of the exhibition also reflects this when it references, as the annals describe it, that there was “blood-red rain for two years”, or another reference to when the lakes of Leinster froze over.

The assumption is that the red rain was caused by volcanic ash ejected by an Icelandic volcano, and other examples of climatic change recorded in the annals may also have had their origins in volcanic ash based on the work of Prof Ludlow, she says.

The 350-million-year-old coral fossils were recovered in Ireland with many examples held in the geology department. They produced thin cross-sections and McDonald uses these patterns as part of her designs on vellum. Her pieces also reflect earlier work by her in conjunction with academic Prof Chris Bean of the UCD Earth Institute on the acoustic signals coming from the Eyjafjallajökull volcano, once again an art/geology cross-over.

The scientists installed detectors to record sounds within Eyjafjallajökull. She used the same data in conjunction with a composer to produce music based on the volcano’s signals. “That is how I got stuck into all of this,” McDonald says.

The Irish monks may not have understood the climate-altering impact of volcanic ash but they certainly understood its effects within Ireland.

McDonald has taken the skills and artistry of the past and merged it with our modern-day understanding of the sciences to create an impressive exhibition where science inspires art and art inspires science. PAINTING ON CALF SKIN: THERE’S THE RUB Calf skin or vellum represents a key element of the exhibition being put together at UCD by Siobhán McDonald. She acknowledges that working with it evokes a strange mix of disgust and excitement.

Vellum was used in medieval times as a high-quality material upon which to write important documents. It is used in the Book of Kells and other important manuscripts, and in deeds and legal documents.

McDonald is using it because of the links her exhibition forms between the past and the present.

Along with the vellum, she has reproduced a number of the mineral-based pigments similar to those used by the Irish monks as they scribed religious texts or their Irish annals. “The materials themselves leave repositories of time,” she suggests.

Vellum is an unusual medium and it took time to learn the techniques of handling it and applying paints to it. She worked with John Gillis, senior conservator at Trinity College Dublin, who is an expert in the material.

“It is very fleshy and it has anatomical memory,” she says. This means it tries to return to its original contours despite stretching and pressing. It would start to curl back into its original shape, in the process shedding any paint or ground bone used as pigments, she says.

She visited the Royal Irish Academy to look at vellum pages from the annals and got an idea of how experienced monks might have used it.

She uses whole calf skins as a single element rather than cutting it into a shape, and then applies the pigments. She also learned how the skin can be “burnished” by repeated rubbing, making it become translucent.