Tyrannosaurus rex was teenage mother while velociraptors were ‘not that smart’ 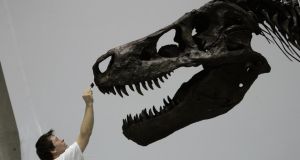 Tyrannosaurus rex was a teenage mother and velociraptors are “not that smart after all”, according to the latest developments in palaeontology.

“We’re used to seeing reconstructions of dinosaur behaviour in films and TV and we often take it for granted but actually a lot of it is speculation,” explained David Button, a palaeontologist at the University of Bristol, speaking at the British Science Festival.

“We used to think dinosaurs were quite callous in that they laid a large number of eggs which hatched without much care and only a fraction survived into adulthood. Now we know some even sat on their eggs like chickens,” he said.

“We can look at the cell structure of bones which tells us about development, so now we know many dinosaurs were teen mothers – they reached sexual maturity and started breeding before they were fully grown themselves. In bigger species the babies would put on 500kg per year, only reaching full size in their late 20s.”

Skeletons give us a rough idea and for a long time that was all we had to go on, but if you look at a camel you would be completely wrong about its shape as the skeleton has no humps, he said.

“Unbelievably, now we can use nanotechnology to see cells with pigment and reconstruct the colour patterns of animals from millions of years ago. We used CT [computed tomography] scanning to make 3D models of skulls and then work out jaw muscle size and bite force. Tyrannosaurus is still the king with a bite force of nearly three times that of the most powerful known biter now, the crocodile.”

Another technique called evolutionary modelling uses computer coding to repeat millions of possible movements to find the most likely gait for a particular species, he explained.

“Sadly, the velociraptor is not as fast as the movies would lead us to believe, at 39 km/hr. It also turns out velociraptors were probably not that smart, maybe duck-smart but not chimp-smart. There’s not much evidence to suggest raptors hunted in packs but we do think they did probably hang out together.”