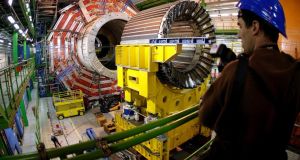 The world’s largest and most powerful atom smasher has restarted after an upgrade that could see it making scientific history for a second time.

Shortly after 8.30am on Sunday, scientists sent two beams of high-energy particles racing through the Large Hadron Collider’s 27km of circular underground tunnels.

Two years ago the team operating the multi-billion euro machine straddling the Swiss-French border astounded the world with the discovery of the Higgs boson, an elementary particle that gives other particles mass.

Now they have their sights set on an even more exotic trophy - dark matter, the invisible, undetectable material that makes up 84 per cent of matter in the universe and binds galaxies together yet whose nature is unknown.

With its beam energy level raised to 13 tera-electron volts (TeV) it is conceivable that the Large Hadron Collider (LHC) will capture dark matter, marking a leap forward in our understanding of the universe.

Arnaud Marsollier, from Cern, the European Organisation for Nuclear Research in Geneva, which operates the LHC, said: “The LHC will be running day and night. When we will get results we don’t know. What is important is that we will have collisions at energies we’ve never had before.

“If something interesting appears in this new window we will see it. It might be two months from now or two years, we’re not able to say. It took 50 years to find the Higgs boson and 20 years to build this machine, and it will be running at least until 2035, so we can be patient.”

A technical hitch had delayed the restart of the LHC after a two year re-fit and upgrade almost doubling its power.

An electrical short circuit prompted fears that operations could be put back weeks or even months. However, engineers quickly located the problem — a small piece of metal debris — and removed it.

The restart involved relatively weak beams of protons, the “hearts” of atoms, being sent around the tunnel ring in both directions. It will be some weeks before the beam energy is ramped up to its target level of 13 TeV.

The first collisions between the particles, marking the start of a new phase of LHC experiments, will not take place until June.

They will take place in four giant detectors placed around the beam ring, sparking the creation of new particles and allowing scientists to peer deep into the fundamental building blocks of nature.

Energy can be converted into mass in accordance with Albert Einstein’s famous equation E (energy) = M (mass) times C (the speed of light) squared. The more energy available, the more massive the particles that can be created.

The search for dark matter involves stepping outside the Standard Model, the all-encompassing theory that describes the particles and forces of nature that has stood firm for the past 50 years.

A “new physics” model of the universe called supersymmetry predicts that every known particle has a more massive partner — and one of these elusive supersymmetry particles might be the source of dark matter.

At a Cern briefing in Geneva last month, British scientist Professor David Charlton, from the University of Birmingham, who heads the Atlas detector team, said: “We’re heading for unexplored territory. It’s going to be a new era for science.”