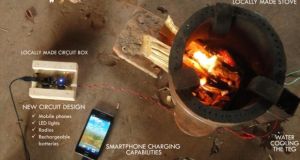 An EmPower cookstove in use charging a mobile phone. Image: Anthony Robinson/TCD

Irish engineers have developed an inexpensive stove for use in the developing world that cooks food but also produces enough electricity to power lights and charge a mobile phone.

The team has spent five years developing the electronics needed to allow heat from a simple clay stove to generate enough electricity to run a mobile or a USB radio.

The clay stove is built locally and the low-cost electronics are brought in and assembled with the stove.

Its developers at Trinity College Dublin trialed the unit in rural Malawi where the stove design is in widespread use.

Intensive testing of various designs and circuits carried out in Dublin were then transferred to Malawi for field testing.

Dr Anthony Robinson of Trinity College Dublin’s department of mechanical and manufacturing engineering started and led the research project, and is now seeking crowdfunding on Indiegogo in order to begin mass producing the cookstove design.

“It is an Irish-born and Irish-bred project. We have nothing to gain personally from this,” Dr Robinson said. All of the technology developed for the EmPower stove is being offered free of charge to anyone who wants it.

“It is all open source. It is about setting up an infrastructure in Malawi so people there can produce these and make money,” he said.

He hopes that small local factories will be set up to mass produce the cookstove. “The idea is to set up a plant where they can build them locally,” he said.

The stove design is already popular in Malawi and is used to cook and boil water. When the circuits are attached the stove also delivers about four watts at five volts, about the same as a USB port on a laptop.

The heart of the device is the thermoelectric generator which converts heat to electricity.

“The only parts that have to be shipped in are the circuits and the thermoelectric generator. As various designs evolved we learned it had to be very simple mechanically but very intelligent electrically,” Dr Robinson said.

Rural Malawi was an ideal location to trial the stove as 90 per cent of the population has no direct access to electricity.

He believes a complete stove when mass produced would cost about €22.50 and all components are replaceable if something breaks.

Dr Robinson got involved almost by accident and had no idea it would take the amount of time that it did.

Once he had the idea, Ireland’s developing world support body Irish Aid became the main funder, and support also came from the Irish Research Council, Intel and from Trinity College Dublin.

He hopes to raise enough money through crowdfunding to begin large-scale production of the EmPower cookstove.

To back the project on Indiegogo, see bit.ly/1PESi82.