Irish cut out bread before alcohol to lose weight 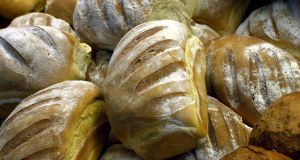 Bread: Gluten, a protein found in grains such as wheat, barley and rye, can cause serious problems if eaten by those with coeliac disease. Photograph: Frank Miller

People are more likely to cut down on bread than alcohol in an effort to eat healthily and lose weight, according to a survey that also suggests people are using the internet to diagnose their ills and make decisions on health.

The survey of 1,000 people on both sides of the Border taken a month ago suggests that internet-based self-diagnosis is “rife” with 44 per cent of respondents having diagnosed themselves with an illness.

Bread is often in the firing line when it comes to the things that must be avoided, something that prompted the Irish Flour Confectioners and Bakers Association to commission the survey in time for National Bread Week, which starts this weekend.

Bread is often targeted given the increasing numbers of people who believe that they feel healthier if they adopt the gluten-free diet that is required by those who have coeliac disease.

The survey showed “the public are increasingly confused about the role bread can play as part of a healthy balanced diet”, said Dermot Kelly, president of the association. People had picked up “many myths” about bread despite it being a staple food, he said in advance of the third national bread week.

Gluten, a protein found in grains such as wheat, barley and rye, can cause serious problems if eaten by those with coeliac disease. It triggers a serious immune system attack, which damages tissues in the small intestine. Those who can tolerate gluten have no such problems but some celebrities and groups began to take it out of their diet due to claimed health benefits.

There are many misconceptions that encourage people to avoid gluten unnecessarily, said Prof Fergus Shanahan, a professor of medicine at University College Cork.

People avoid gluten or reduce sugar to have a health impact that does not occur. “A lot of this has to do with the amount you eat. We all need carbohydrate, it is only a matter of how much,” he said.

Avoiding gluten does not in itself cause harm. “It doesn’t impose some long-term deficit, but in the modern world there is a problem because so many foods contain gluten,” he said.

GPs were well aware that many patients self-diagnose, particularly in areas like food intolerance, said Dr Brian Osborne of the Irish College of General Practitioners. “We do not have independent research to establish how prevalent this is,” he said.

The advice for those with health concerns, however, is to seek a diagnosis from a doctor or dietician. Otherwise there was “no medical basis for eliminating a particular food group from an individual’s diet”.

Many people readily follow celebrities for spurious health advice said dietician Dara Morgan, who works with SMC Medical in Dundalk. Some people go gluten-free as a way to lose weight, she said. “That is the perception but it is wrong.” Cutting out different foods on untested health claims was known as “disordered eating”, she said.

President urged to not sign Bill on mother and baby home records into law 20:01
Q and A: what is this controversy about hand sanitiser? 19:53
Cyclist in his 60s dies after road collision in Co Cork 19:43
Covid-19: Public urged to ‘stay at home’ as 1,025 further cases confirmed in State 18:25
Ireland suspends extradition treaty with Hong Kong over security law 18:23