Irish contribution to space race to go on display to public

Professor Denis OSullivan is set to donate his Apollo 16 experiment equipment to the National Museum of Ireland today. He recalls an era when telegrams were used by scientists to update their colleagues. Video: Darragh Bambrick 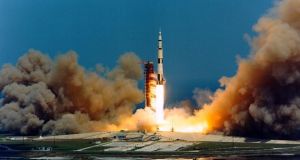 A small part of the 1960s space race will soon go on display in Ireland, an experiment that flew to the moon in April 1972 with Apollo 16. Irish scientists devised and developed the experiment with colleagues in California.

At noon today those scientists, Prof Denis O’Sullivan and Prof Alex Thompson of the Dublin Institute for Advanced Studies, presented it to the National Museum at a ceremony at the Natural History Museum on Merrion Square, Dublin.

“We had suggested the experiment for Apollo 13 but it didn’t fly to the moon until the Apollo 16 mission,” Prof O’Sullivan said. “We developed the idea while I was at Berkeley.”

Although based in Dublin, Prof O’Sullivan has been involved in international space-related research for more than four decades. He was a post-doctoral researcher at Berkeley in 1969 and was among the first to study moon rock samples carried back by Neil Armstrong.

Cosmic rays
He is an expert in cosmic rays, the high-energy particles given off by supernova star explosions and other sources in deep space. These can cause damage to human tissue and so were a matter of some concern to the US and other space agencies.

While it was possible to measure them on the Earth’s surface, the flight controllers had no idea what exposures to these rays might be like away from the Earth’s protective magnetosphere, Prof O’Sullivan said. His colleagues at Berkeley, led by Prof P Buford Price, were interested in other damaging particles, those coming from the sun as solar particles.

“I was back in Ireland at that stage and we split the experiment,” Prof O’Sullivan said. “The Dublin Institute did the cosmic ray aspect of it and Berkeley did the solar flares.”

Prof Thompson worked with him on the Dublin side. They used what look like no more than plastic rectangles, which if hit by a cosmic or solar particle would leave a tiny track.

These detectors flew with the astronauts on Apollo 16.

“It was hung outside the landing module, attached to one of its feet. It was left outside for several hours and then brought back to Earth so we could study the tracks,” he said. “We carried out the very first cosmic ray analysis from outside the Earth’s magnetosphere while on the moon.”

These detectors are to be presented to the museum.