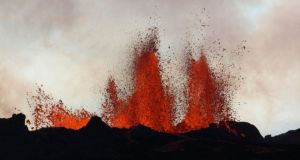 Fountains of lava, up to 60 meters high, spurt from a fissure in the ground on the north side of the Bardarbunga volcano in Iceland on September 2nd. Photograph: Reuters

Iceland’s Bardarbunga volcano continues to rumble, threatening to blow its top and throw tonnes of ash into the atmosphere like the Eyjafjallajökull volcano did in 2010. This time, however, scientists will be tracking the volcano minute by minute with an array of instruments that they hope will allow them to predict any impending eruption and give early warning of the dangers.

Bardarbunga has been at “code red” twice since it started erupting on August 29th last blasting molten rock 100 metres into the air. The question is will it be an explosive release that could cloud the skies over Europe with ash, said Prof Simon Redfern, professor in Earth sciences at the University of Cambridge. “There is no sign of that happening yet.”

He and four other volcanology experts joined today to talk about the risks posed by Bardarbunga at the British Science Association’s annual festival of science. These included Dr David McGarvie of the Open University who was in touch by mobile phone from a tent pitched near where the eruption is taking place.

The volcano currently bristles with monitoring equipment including 70 seismometers along with strain gauges to measure pressures underground. Some of these have been moved hastily to prevent them being covered by flowing lava.

Satellites overhead have been monitoring the rapid collapse at the centre of the volcano, its caldera. This is sinking down 90cm a day and since the eruption started it has dropped 20 metres, said Dr John Stevenson of the University of Edinburgh. “There are big movements going on here,” he said.

This was an important eruption for earth science, and had much to teach us about volcanoes, said Dr Susan Loughlin, head of volcanology with the British Geological Survey. “For the first time we will be totally monitoring and recording enormous amounts of data,” she said.

The goal is to be able to predict an impending eruption and give as much early warning as possible. This has proved a difficult challenge however despite the instrumentation. These note tremors and minor earthquakes, but volcanoes like this only erupt once in 300 years so there is little comparative data on patterns of behaviour, Dr McGarvie said.

Even so they know that recent past eruptions were preceded by dozens of small tremors. “We are much much better prepared for any eruption,” he said.

Eruptions cause local impacts in Iceland with dangers posed by noxious gas emissions and the risk of severe flooding if the eruption starts under a dome of ice.

Europe however fears ash cloud discharges that can follow explosive eruptions under ice. Early warning would be a major help for aircraft and also information about the movement of ash clouds.

The Eyjafjallajökull ash grounded 90,000 flights over Europe, Dr Stevenson said. Here too however we are better prepared this time around. “The computer models are really good at predicting where the ash is going to be,” he said.

And a laser-based device that can measure ash density in the air has been installed near Bardarbunga. It will be used to indicate whether any ash released exceeds the four micrograms of ash per cubic metre limit for commercial aircraft flying through the cloud.