How did Earth’s garden grow? Find out at Bloom in the Park 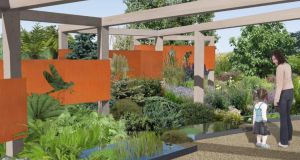 The evolution of plants through geological time has culminated in the diversity of species we see around us today. Across forests, savannahs, deserts and grasslands, from tropics to northern boreal regions, a staggering range of plant life exists. Plant types include ferns, trees, grasses and crops, and provide essential food for all life on Earth. But this wasn’t always the case.

Plants emerged from water and appeared on land more than 500 million years ago. Considering that Earth is an estimated 4.5 billion years old, this development is relatively recent.

The earliest plants on land took simple forms such as mosses and liverworts, with later-evolving plant groups developing various survival strategies and innovations. This resulted in further diversity and complexity. And with that plant diversity came the co-evolution of animals, including humans. Plants produce the majority of food that humans consume today.

This timeline of evolutionary innovations throughout the history of plants is hard to imagine and often proves to be a complex task in the education of students.

In an effort to simplify this task, researchers at University College Dublin have created Ireland’s first evolutionary garden in the form of an outdoor classroom. Demonstrating plant evolution from the beginning of plant life to the present day, the UCD Evolution of Plants Garden will be launched at this year’s Bloom in the Park festival in June.

The garden incorporates a range of plant groups – and almost 2,000 individual plants – from various evolutionary times over the past half a billion years. The representative plants in the garden show key evolutionary developments over time, among ponds, information panels and an internal walkway.

“The evolutionary garden is designed to take you on a walk through evolutionary time and charts the development and turnover of plant species across temporal boundaries” says McCabe. “The garden will be both informative to the public and educational for students visiting or studying at UCD.”

The garden will contain both historical and new varieties of plants, a series of ponds and a walkway along an evolutionary timeline, he says. “Information panels will describe what you see, and a backdrop of animal images will show their combined evolutionary development alongside plants.”

In order to represent ancient plants the project’s creators have used so-called “nearest living equivalents”, as well as modern descendants of ancient species.

“The garden represents Ireland’s first ever Bloom entry from a university,” says Elliott-Kingston, who is garden designer and project manager. “In order to bring the project to fruition we have had the help of a vibrant team, both within UCD and externally. We have also developed an associated website.”

The project does not end there. “After Bloom, the garden will be permanently located on the UCD campus, open to the visiting public and will be used as an outdoor educational tool for third-level undergraduate and master’s courses, as well as other outreach activities, including UCD’s Science Summer School.”

“Plant evolution coincided with various climate changes, mass extinctions and plant turnover events of the past. The garden will showcase the key plant innovations through these climate transitions, and– importantly – point towards the potentially negative effects of current climate change on future plant evolution, crop production, and food security,” says McCabe.

Elliott-Kingston indicates that “horticultural vegetables, fruit crops and cereals in the angiosperm [flowering] plant division have not experienced high CO2 episodes in their evolutionary past, meaning that their response to current and future climate change is unknown.

“Since angiosperms provide food for all human life on Earth, their uncertain future means that an intensification of plant-based research is critical towards solving global problems such as feeding a growing world population,” she says.

The UCD Evolution of Plants Garden project is funded by UCD, the UCD Foundation, and Bloom. After exhibiting at the Bloom in the Park festival, June 2nd-6th, the garden will be relocated to UCD and open to the public. The project website will soon be available at ucdgarden.com.

Conor Purcell is a postdoctoral fellow at the Earth Institute, University College Dublin, and a science writer. He is @ClimateGuruNet on Twitter. Some of his other articles are at cppurcell.tumblr.com

EVOLUTION: FROM ‘THE LAST UNIVERSAL ANCESTOR’ TO NOW

Evolution is the process through which life on Earth has developed and changed, increasing in diversity and complexity over time. This is an exceptionally slow process, difficult to witness during one human lifetime, and is driven by the process of natural selection.

Evolution works through occasional gene mutation, which occurs during the process of reproduction.

Every now and then these chance mutations provide an individual with an advantageous characteristic, which enables it, whether bacterium, plant or animal, to produce more competitive offspring than its relatives and rivals.

While disadvantageous gene mutation, which results in lower survival rates among offspring, are quickly filtered away in the gene pool, beneficial gene mutation travels rapidly throughout the pool, generation after generation, manifesting as dominant traits across species. What was mutation becomes the norm.

Every living thing around us today is a contemporary product of the evolutionary process of natural selection. Indeed all life on Earth is believed to have had one common ancestor – known as the last universal ancestor– which is thought to have appeared 3.5-3.8 billion years ago.

Plants, animals, bacteria, human eyes and ears, feet and toes, and even (only by a small stretch of the imagination) modern skyscrapers, silicon memory boards, and internal combustion engines, are all contemporary products of that same evolutionary process.

Evolution continues today just as it has done in the past, and the evolution of life will proceed until the end of life itself.