Hooray for Hamilton: a walk and talk in memory of Ireland’s greatest mathematician 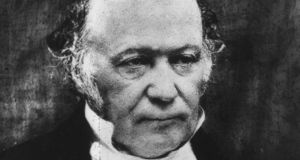 Sometimes a short stroll in the autumn sunshine can be highly educational. A walk along the Royal Canal planned for next Wednesday will be just such a sojourn for those unfamiliar with the greatest mathematician Ireland has ever produced.

Every October 16th the staff and students of the department of mathematics at NUI Maynooth and members of the public follow the route taken by William Rowan Hamilton as he walked from his home at Dunsink Observatory into Dublin.

He had been struggling for some time with a mathematical problem that he just couldn’t solve. On that day in 1843 he had crossed fields to reach the canal towpath and was strolling along, just approaching Broome Bridge, when the answer struck him.

He described in later life how the answer came like an electric spark, and in a moment he had it. He also tells of scratching the formula that solved his problem into the stonework under the bridge lest he forget it, but there is no mark left today.

This was no small discovery. It allowed him to develop a completely new form of algebra called Quaternions, which have been used since in advanced physics but also to control movement in computer games such as Tomb Raider.

The easy-paced walk starts at Dunsink and finishes at Broome Bridge. It is open to the public but you must book by contacting Fiacre Ó Cairbre at Maynooth on 01-7083763.

Twistor time: Penrose to give lecture next week

The Hamilton Day Lecture takes place each year during Maths Week and sees a world-renowned mathematician deliver a talk to a largely lay audience.

The speaker this year is Sir Roger Penrose.

Penrose, a mathematical physicist based at Oxford, is internationally renowned for his scientific work, particularly for his contributions to general relativity and cosmology. He received the 1988 Wolf Prize for physics, which he shared with Stephen Hawking for their contribution to our understanding of the universe.

His talk, Twistor Theory: A Developing Hamiltonian Legacy, has a strong link with the famous Irish mathematician William Rowan Hamilton.

Hamilton’s invention of a new form of four-dimensional algebra has been applied in many ways, including one important to Penrose, relating to the theory of twistors, which Penrose proposed in 1963.

Twistor theory attracted little attention from the physics community until the early 21st century, when it was found to be useful for describing the scattering of particles at very high energies.

The lecture takes place at 7pm, next Wednesday, October 16th, in the Trinity Biomedical Sciences Institute on Dublin’s Pearse Street. Admission is free, but advance booking is essential. Book online at ria.ie.

The lecture is organised by the Royal Irish Academy with support by Arup and The Irish Times.