A cutting-edge branch of robotics takes its inspiration from nature’s non-skeletal animals and organisms to design flexible, versatile robots made of rubber 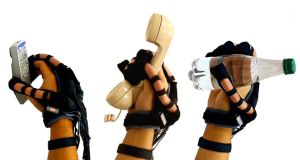 Conor Walsh’s soft-robotics glove made with off-the-shelf components, which can be controlled to assist a human hand in flexing fingers or grasping objects

When it comes to designing a robot nowadays, it pays to be flexible. The concept of a robot usually brings to mind a humanoid shape, made of metal, moving around clumsily and unable to climb stairs. This type of traditional robot would be completely inadequate for search-and-rescue operations in hard-to-access spots; following an earthquake, for example.

A branch of robotics is emerging to meet that type of challenge: soft robotics. It takes its inspiration from nature’s many non-skeletal animals and organisms to design highly flexible and versatile robots with bodies made of very soft rubber.

The US army pushed the early developments in its search for simple and cheap soft robots that could be sent on to the field to detect explosive devices. Type “soft robots” into a search engine and you will find videos of several such prototypes, all crawling, climbing and walking in eerily organic ways.

Now biomedical applications of soft robotics are on the agenda. For instance, the European project Stiff-Flop is developing an artificial flexible arm that can bring a surgical tool and camera close to an organ by making its way slowly inside the body. It recalls an unpleasant scene from Alien, but it will lead to less invasive treatments and scarring than current surgical protocols. It takes its biological inspiration from the mechanics of the octopus arm.

Dublin-born Conor Walsh was educated at Trinity College Dublin and MIT, and is assistant professor of mechanical and biomedical engineering at Harvard University and a member of the Wyss Institute for Biologically Inspired Engineering. The 32-year-old has always been fascinated by the idea that robots could interact and cooperate with humans.

His soft robotics glove is a case in point. Made of off-the-shelf components, it can be controlled to assist a human hand in flexing fingers or grasping objects. “The idea is to give partial support instead of the full support that used to be the goal of hard metallic fingers,” he says.

Hand rehabilitation following an injury or a stroke is expensive and requires many trips to a specialist. “Research in physiotherapy shows that to give someone a small amount of assistance has a big impact on their recovery. We envision a patient at home wearing a glove programmed remotely to set routines by the physiotherapist. Conversely, with soft sensors implemented in the glove, progress can be monitored and customised.” He reckons clinical trials are only one to two years away.

Working with Irish PhD student Ellen Roche, a graduate of NUI Galway and TCD, he is also busy designing better soft-robotic components to assist a failing heart. “The novelty and main advantage of our artificial heart muscle is that it helps the pumping action without being in contact with blood,” she says.

Walsh gets excited when his wearable “soft robotics exo-suit” is mentioned. Fans of Iron-Man or Edge of Tomorrow will know how Hollywood writers imagine the “exoskeletons” of the future: metal armour encasing our limbs and multiplying their power.

Instead, Walsh has taken the fundamentally different approach of assisting humans in walking with a soft, light suit that powers their gait with a small boost at the right time. The multimillion-dollar funding for this project comes from the US army, which wants soldiers who can go farther, for longer.

In Ireland, research and training in soft robotics is in its infancy. Dr Dónal Holland from TCD and Dr Eoin O’Cearbhaill from UCD have both worked with Walsh in the past. They place great hope in the Soft Robotics Toolkit website, which has just been launched by Holland and Walsh.

“This is a repository of all the knowledge accumulated on soft robots at Harvard and elsewhere. It gives a hands-on approach to building your own, using cheap, easily available components,” says Holland.

The barriers to entry into soft robotics are quite low, with 3D printers now available in universities to create moulds into which cheap, soft rubbers can be poured to set.

“I think our biomedical engineering programme at UCD is well equipped to contribute to this field,” says O’Cearbhaill. “We have students from mechanical and electronic backgrounds learning skills in biomechatronics, and the website will be a great learning tool for them.”

O’Cearbhaill is already working on designing biomedical soft robots in collaboration with the Mater hospital.

Prof Michel Destrade is head of applied mathematics at NUI Galway and on placement at The Irish Times as a Media Fellow from the British Science Association and Science Foundation Ireland. softroboticstoolkit.com

Some environments simply cannot be explored safely by humans. Think of the core of a nuclear plant, a minefield, a collapsed building, or the surface of a faraway planet.

Hard-shell metallic robots are not very efficient for these tasks, as they cannot deal well with accidents in the terrain. Spirit, one of the two rovers sent to Mars in 2004, became stuck in 2009 and then stopped communicating.

By mimicking the motion of nature’s simplest organisms, soft-shell robots can help. For example, starfish, worms and caterpillars use very simple modes of locomotion. Those modes are easy to implement into soft rubber-shell robots, where the “muscles” are contracted using fluid pressure changes or electrical signals sent to soft actuators.

The results can be spectacular. Small, cheap and easy-to-create rubber animals can be made to crawl, turn around, climb and even walk upside-down.

The potential applications are endless, as it is not much of a stretch to imagine a scenario where a number of these “animals” could be sent out to explore inhospitable worlds in all directions, streaming videos of what they encounter until their batteries run out.

Some biomedical engineers think self-propelling endoscopic devices, moving like worms inside bodily canals and cavities, will be an integral part of the future of medicine.

Some start-up companies are already being formed in that area of research, such as the Harvard University spin-off Soft Robotics.