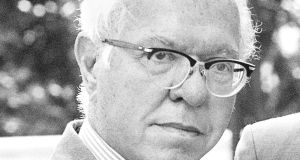 Fred Hoyle, a brilliant and controversial figure who made a number of original contributions to 20th-century physics

Earlier this month, I attended a meeting at the Royal Astronomical Society in London in memory of the celebrated British astrophysicist Fred Hoyle. Hoyle was one of the best-known physicists of his generation, a brilliant and controversial figure who made a number of original contributions to 20th-century physics.

It was a great treat to hear many of his former colleagues and students recall his contributions to science, from astrophysics to nucleosynthesis and from cosmology to astrobiology. However, Hoyle will always be remembered in the public mind as the scientist who was wrong about the Big Bang.

Following the discovery that the universe is expanding on the largest scales (a phenomenon predicted by Einstein’s general theory of relativity), the Belgian physicist Georges Lemaître suggested that our universe may have started as a hot, dense fireball many billions of years ago, expanding and cooling ever since; a hypothesis later named the Big Bang.

Many physicists found Lemaître’s Big Bang universe rather far-fetched, and the theory fell to one side for some years as there was no obvious way to test it. Then, in 1948, Fred Hoyle, a young professor at Cambridge University, suggested an intriguing alternative: perhaps the expanding universe could remain unchanged over time if matter was continuously created out of empty space? This “steady-state universe” was attractive to many scientists because it did not require any speculation about cosmic origins or the behaviour of the universe in the distant past.

A serious debate arose between the steady-state and Big Bang theories during the 1950s and 1960s. The debate became rather bitter at Cambridge, when a group led by the astronomer Martin Ryle embarked on a systematic study of the galaxies using the new technique of radio astronomy. The purpose of this project was to study the distribution of the galaxies at different epochs, with the specific aim of proving that we live in an evolving Big Bang universe.

After a decade of uncertain results, the Ryle group eventually demonstrated that their observations supported the Big Bang model. Soon afterwards, their result was bolstered by an unexpected discovery by American astronomers: a universal background radiation thought to emanate from the hot infant universe (now known as the cosmic microwave background).

It is fair to say that Hoyle was not pleased with the results from astronomy. He made many efforts to cast doubt on the data of the Ryle group, and suggested alternative explanations for the cosmic microwave background. Later, he proposed many modifications of his steady-state theory, but most physicists found his model increasingly contrived.

Thus, it is often said that Hoyle was wrong on the Big Bang. However, such a statement is a little unfair in the sense that the evidence against Hoyle’s theory was not available when it was first proposed. Indeed, Hoyle’s steady-state model was a reasonable hypothesis at the time, as I pointed out in my talk at the conference.

I also made the point that we now know that Einstein considered a steady-state model of the expanding universe some time before Hoyle, a little-known fact unearthed by my research group a few years ago.

Hoyle lost the Big Bang debate, and he became very isolated in his later years, having taken early retirement after a dispute with university administrators at Cambridge. However, his resistance to the Big Bang model played an important part in provoking astronomers to test the theory.

He made many other contributions to physics, notably the first successful model of the synthesis of the chemical elements in the stars (stellar nucleosynthesis). He also suggested that life on Earth might have been seeded by bacteria on comets, a suggestion that opened up an entirely new academic field known as astrobiology. But, outside of the UK, Fred Hoyle will always be remembered as the man who was wrong on the Big Bang.

Burglar jailed for sexually assaulting woman who awoke with his hand on her throat 16:16
Woman jailed for assaulting a family friend who was trying to break up a fight 16:07
Judge sanctions €7,500 settlement for child over lip injury 15:45
Settlement of €80,000 for girl injured after aunt had partial seizure while driving 15:36
Breakthrough by Cork scientists on colon cancer detection 15:25