Fracking ban could be lifted if issues are rectified

The impact of fracking can be controlled and regulated, according to the EPA’s report 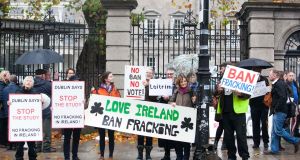 Anti-fracking protesters outside the Dáil. Minister for the Environment Denis Naughten said that decisions on fracking “should be made on the basis of peer-reviewed science”. Photograph: Leah Farrell/RollingNews.ie

Environmental groups have strongly welcomed Denis Naughten’s decision to continue the current ban on fracking, which he said he had made in light of a major Environmental Protection Agency report on the practice published on Wednesday.

This does not mean, however, that fracking operations could not be pursued in future.

Mr Naughten said it had always been his view that decisions on fracking “should be made on the basis of peer-reviewed science”.

The science message in the report, however, is that most of the problems associated with fracking involved issues that could be rectified. They found many of the impacts of fracking were straightforward and easily controlled and regulated, said Alan Hooper of CDM Smith Ireland Ltd, a company involved in researching the report.

“Most of it [the work] is conventional. A lot of these things are traditional so the regulations are in place.”

This includes things such as waste water runoff or maintaining a site in terms of air, water or sound pollution.

One involved the risk of pollution getting into groundwater sources due to the failure or deterioration of the wells drilled as part of fracking.

While drilling and construction of wells is a routine process for water, oil and gas, there are examples where wells have failed or gradually deteriorated, allowing leaks and discharges that could reach human water supplies.

A second problem area for the authors involved the cracks formed in rocks by fracking. Typically, these would run between 100 to 200 metres from the point of fracking, but occasionally these cracks in the rock unexpectedly extended for 300 metres and in exceptional examples to 500 metres.

The third area of concern relates to gas leaks, mainly methane, seeping out of shut-down well heads, through deteriorating well pipes or out of the surrounding rock disturbed when the well was first drilled.

This is a regular problem in oil and gas wells, and sealing of well heads is not always straightforward.

“Neither the reasons for this nor the scale of the emissions are known quantitatively and therefore their impact cannot be reliably assessed until further data are available,” the authors write.