Even T Rex might have dined on carrion, model shows 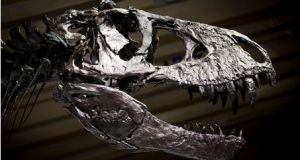 Everyone knows Tyrannosaurus Rex was a super predator, but did that beast also snack on carcasses left behind by other predators? File photograph: Getty Images

Vultures and hyenas have provided the inspiration for a study that helps establish who got to eat what during the age of the dinosaurs.

Some were mighty predators who always got the best grub - but a surprisingly large number survived on scraps and leftovers.

It all has to do with energy balance and how far a dinosaur might have to travel before enjoying its next dinner, explained Dr Kevin Healy, a research fellow at Trinity College Dublin.

Colleagues from Trinity and from the University of St Andrews in Scotland collaborated on a study that helps explain which dinosaurs secured fresh meat and which ones relied on scavenging, Dr Healy said.

There is no shame admitting to scavenging, given 50 per cent of the energy consumed by that most regal predator, the lion, can come from carrion.

Everyone knows Tyrannosaurus Rex was a super predator, but did that beast also snack on carcasses left behind by other predators?

The team could only answer these questions by developing a computer model that imitated life as it might have been on the Jurassic landscape.

“We can’t watch them but what we can do is figure out ballpark figures for the energy demands required for a dinosaur walking around and how much food was there, and then build a model to replicate that,” said Dr Healy, who is based in Trinity’s zoology department in the School of Natural Sciences.

They came up with something akin to the Pacman computer game, with modelled dinosaurs of various sizes moving though a space where there were carcasses available.

They found the most efficient scavenger dinosaurs were those weighing between 500kg and 1,000kg, including juvenile T rex and animals such as Dilophosaurus and Utahraptor.

The model shows this size of beast could cover large areas in search of prey or carrion without running out of energy.

Smaller meat-eaters just could not keep up and had to occupy smaller areas, scavenging as they could.

T rex was just too large to wander about in the hope of finding handy left-over meat given its colossal calorific demands, the researchers report in the journal the American Naturalist.

It had to live up to its reputation as a top predator and kill whatever it could find without having to travel too far to do it.

“By using these new types of models we can show scavenging was pretty important for dinosaurs but particularly for intermediate-sized animals,” Dr Healy said. “It also shows that T rex was a better hunter than a scavenger.”