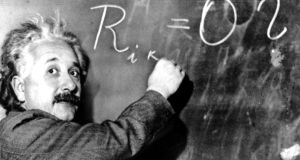 Einstein at work: does relativity scepticism present an interesting case of a ‘clean’ mistrust of science?

This semester, I’m teaching a first course in relativity to our students. The idea, one of the most famous theories of modern science, was first proposed in 1905 by a young patent officer who later became the world’s most famous scientist.

Albert Einstein’s starting point for his theory was his insistence that the laws of physics must be the same for observers at rest or travelling at constant speed. Applying this seemingly reasonable principle to the phenomenon of electromagnetism, he arrived at a much less reasonable postulate: namely, that the speed of light in a vacuum (the speed at which an electromagnetic wave travels) must be the same for all, irrespective of the motion of source or observer.

In his paper, Einstein showed that his proposal could solve several well-known puzzles in electromagnetism. However, the price was high. Since the speed of anything is the distance travelled in a given time interval, the new theory had strange implications for space and time. If the speed of light was truly absolute, space and time could not be. The effects would not be noticeable under normal circumstances, but would be significant for objects moving at very high speeds.

The strange new theory was ignored at first. However, by 1909, it had been established that the mass of electrons, the lightest known particles of matter, increased significantly with their speed. This was a great triumph for Einstein. As the new physics began to be accepted, he embarked on an epic attempt to extend it to accelerating bodies. This work, the “general theory of relativity”, was much more difficult, but eventually led to a new theory of space, time and gravity.

Today, the relativistic effects of time dilation, length contraction and mass increase are routinely observed at particle accelerators (“atom smashers”) worldwide. Millions of bytes of evidence in support of the theory are recorded at the Large Hadron Collider at Cern, the European Centre for Particle Physics. For example, tiny particles accelerated to unimaginably high energy never quite reach the speed of light; instead their mass is observed to increase. Similarly, the speed of the light emitted by some particles moving at extremely high speed is measured as the normal speed of light in a vacuum.

Still, relativity remains a common target for science sceptics. Most professional physicists routinely receive a great number of “refutations” from diverse commentators. Indeed, relativity scepticism is so common that most science journals and magazines have long since stopped accepting submissions on the topic, not least because such articles usually ignore the vast body of supporting evidence for the theory.

My own view is that relativity scepticism presents an interesting case of a “clean” mistrust of science. After all, the predictions of relativity are not in conflict with religious dogma, political worldviews or vested interests (unlike evolution, climate science or tobacco science). I suspect that the scepticism stems from the fact that relativity makes predictions that are apparently in conflict with our everyday “common sense” experience of the world. As Einstein himself once remarked, “Common sense is a collection of prejudices acquired by age 18”.