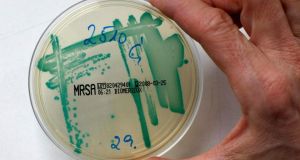 MRSA (Methicillin Resistant Staphylococcus Aureus) bacteria in a petri dish. “There is now a large reservoir of MRSA strains circulating in the community,” said Prof David Coleman, based at the school of dental science at Trinity. Photograph: Fabrizio Bensch/Reuters

The number of MRSA super-bug bacteria strains found in the community is rising rapidly, according to research from Trinity College Dublin.

“There is now a large reservoir of MRSA strains circulating in the community,” said Prof David Coleman, based at the school of dental science at Trinity.

There has been a 44-fold increase in MRSA strains circulating in Ireland between 2002 and 2011, he said. There has also been a six-fold increase in the number of MRSA samples resistant to multiple antibiotics.

“There are definitely a lot more and a lot more very diverse strains circulating and becoming more antibiotic-resistant,” he said. “It is not a phenomenon unique to Ireland - what is unique is we have so many.”

This study sampled for MRSA strains that are found in the community, not those seen in a hospital environment. They are known as “PVL-positive” strains - PVL being the name of a toxin that helps the bacteria to cause infection.

“There tends to be one dominant strain in hospitals - the community ones are far more versatile,” Prof Coleman said. They are “fitter” in being able to survive in harsh conditions, for example on skin and surfaces, and they are able to “hoover up” drug-resistant genes.

MRSA tends to infect the old and debilitated in hospitals, but the strains present in the community more often infect children and the young, said Prof Coleman, professor and chair of oral and applied microbiology at Trinity.

The strains cause skin and soft tissue infections, but also more serious ones including bloodstream infections and necrotising pneumonia.

The dental school undertook the research with the National MRSA Reference Laboratory at St James’s Hospital, Dublin, and Alere Technologies in Germany. They published their findings in the current issue of the Journal of Clinical Microbiology.

International travel increases the mixing of different community strains, helping to cause the very high level of genetic diversity, Prof Coleman said. The diversity and the rising degree of drug resistance was “a worrying development” and something that required enhanced surveillance.

The new strains remain treatable, however, and new technology helps doctors to match up a treatment with a particular drug-resistant strain, he said. Slowing down the spread is also important.

“Hand hygiene is vital, they [the bacteria] are very contagious and fit, and survive on surfaces,” he said. GP awareness was also very important, with doctors who suspect MRSA infection needing to send samples to the reference lab.

This way, patients can receive the treatment considered most effective against a given strain, he said.