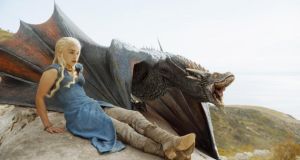 Emilia Clarke as Daenerys Targaryen and one of her dragons in Game of Thrones.

An unsung chicken hero had a central part to play in bringing dragons to life in the TV series Game of Thrones. Special effects people purchased a supermarket chicken and dissected it to understand how a bird-like creature might fly.

It highlights a new approach in film-making and computer generated images. It is all about computerised “motion capture”, explained Dr Karl Abson, lecturer in creative technology at the University of Bradford.

He has developed a new kind of system and is presenting his work at the UK Festival of Science taking place this week in Bradford.

The technology was developed originally to help in the diagnosis of lameness and other motion-affecting conditions in horses, he said. “We needed a way of understanding how an animal moves.”

The movement data is recorded using an array of 20 cameras that use special light that is reflected by patches placed on the horse. His research group uses the data to study characteristic movements associated with lameness, but the detail is so sharp that it was immediately picked up by computer game designers and special effects post-production companies, he said.

Completely natural movements are difficult to achieve using conventional computer-generated images or animation, but digitised actions can be used as a template to guarantee natural movement. It works just the same with humans, and he demonstrated how the movements of a colleague could be picked up and then accurately reproduced on a games background in real time.

The accuracy of movement based on real animals is what is of most value to the film and game production companies. This likely inspired Game of Thrones’s post-production crew to rely on a formal dissection of the chicken who acted as a kind of stunt double.

Visual effects company Pixomondo worked on the dragons and at a talk attended by Dr Abson showed how they studied chicken anatomy to learn how to animate the dragons.