Can we restore our ecosystems to their earlier versions?

Time is running out to wind back the climate clock, says restoration scientist Donald Falk 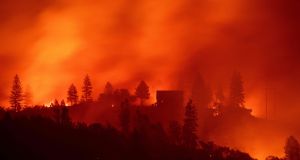 The unprecedented frequency and intensity of recent fires, as we have seen recently in California, is causing “abrupt, dramatic change”, Falk says. Photograph: Josh Edelson/AFP/Getty Images

“Climate change is a game-changer for ecological restoration. We are having to restore into a world that does not yet exist,” according to leading restoration scientist Donald Falk.

Challenging as that prospect is, Falk is obviously energised by the idea that a reconfigured restoration strategy could itself play a key role in mitigating climate change; the world has started to realise that restored ecosystems often have massive potential for pulling greenhouse gases out of the atmosphere.

Falk was in at the birth of restoration ecology, shortly after this new science was conceived in the late 1980s. He was the first executive director of the fledgling Society for Ecological Restoration (SER). But he is now witnessing challenges that appear to threaten the relevance of his discipline – though it has matured remarkably rapidly, and is now cited as a frontline strategy in most current national and international conservation plans.

In the 1990s, he says, the ecological restoration concept was firmly anchored to the idea of the “historical reference system”. That is, the target for restoring any degraded site was the recovery of the biodiversity and ecosystem processes that had once flourished there.

Today Falk teaches at the University of Arizona, and is the “science lead” for the FireScape project, which develops landscape approaches to fire management in the forests of southern Arizona. He was a delegate at the 2015 Paris climate conference, “one of the most memorable moments of my life”. The relationship between climate and restoration is now at the centre of his work.

The rapid, climate-driven shifts in the US southwest’s forest ecosystems over the last 20 years, which are mirrored in very different systems worldwide, from coral reefs to steppes, have forced him to radically reconsider how restoration can usefully develop in the future. The linked combination of increasingly prolonged droughts, and ever more frequent and destructive fires, both driven by climate change, are producing unprecedented vegetation transitions in the whole American west.

Occasional fire is part of the natural “disturbance regime” of the region’s coniferous forests. But the unprecedented frequency and intensity of recent fires, as we have seen recently in California, is causing “abrupt, dramatic change”, Falk says.

“Large, high-severity disturbances can accelerate the pace of landscape transformation from decades to weeks,” he told the European chapter of SER at its conference in Iceland last September. Fire is now, he continued, “a multiplier and accelerator of ecosystem change over vast spatial scales.” The new climate pattern increases fires, then the fires increase the impact of the altered climate, in a feedback loop now familiar in many other systems.

He shows a photograph of a New Mexico hillside to illustrate his point. The steep slope is studded by the charred black skeletons of pine trees. Far beneath them, there is plenty of vigorous life emerging. But this is a very different ecosystem, dominated by shrubby Gambel oaks. The new system will sequester significantly less carbon than the historical forest did.

Previously, after less frequent and less intense fires, many individual pines would have survived, and the forest would have recovered. But Falk points out that in today’s scenario, the failure of most seed-producing pines to survive on this hillside makes the spontaneous regeneration of the pine system a very remote possibility. Extend this scenario across the West, adding in factors like extreme soil erosion post-fire in many cases, and we may be witnessing the vanishing of classic regional ecosystems.

On paper, restoration ecology offers robust techniques to accelerate recovery on such degraded sites, though it is very tricky to execute them well on this kind of scale. But today, a new factor makes success much more difficult: the “climate envelope” has shifted, making the whole region steadily less hospitable to pine-dominated ecosystems, at least as we know them today.

And since Falk’s talk in Iceland, the Intergovernmental Panel on Climate Change has issued its latest report, warning the consequences of even 1.5 degrees’ warming will be significantly more severe than previously predicted. How does this news impact on his analysis?

“This report has simply underlined the urgency of immediate action,” he says. He adds that “the challenges are more social and political than scientific”.

Falk instead advocates a broad strategy that starts by addressing “the root causes of climate change, which are also the root causes of poverty, discrimination and war. When someone tells you we don’t have enough money to take care of all these things, it’s not true,” he told SER in Iceland. “We do have the resources. We are just spending it on other things.”

He illustrated this point with a pie chart showing that 61 per cent of US discretionary budget requested for 2019 is allocated to the military, as against two per cent for energy and environment, and two per cent for science.

This is a significant viewpoint, since some other restoration ecologists have been arguing, for years now, that the pace and impact of global change has made restoration to an historical reference condition a futile, even irresponsible waste of scarce conservation resources.

We still have to work to prevent the causes of ecological degradation. But we also have to do hospital work with the casualties

Instead, they advocate the acceptance and management of what they call “novel ecosystems”, often including alien invasive species. This strategy abandons the classic conservation commitment to maintaining historically appropriate native biodiversity.

Falk does not use his call for social change to absolve restoration ecologists from looking for solutions to climate-related degradation right now. And he notes the new problems are not going away anytime soon, even in the best scenario. Global climate would not stabilise rapidly, much less start cooling, even if our societies suddenly decided to dedicate massive resources to mitigating climate change today.

“We have to do things we have not yet learned to do,” he says. “Yes, we still have to work to prevent the causes of ecological degradation. But we also have to do hospital work with the casualties.” And a great deal of our efforts to heal seriously injured ecosystems today, he says, will be “battlefield medicine”, involving urgent innovation and triage. And that means we won’t always do things right.

So how would he suggest restoring the southwestern pine forests, as they undergo the transitions he is witnessing today?

Essentially, he says, we should now be focused on restoring a system’s resilience and adaptive capacity, while conserving as much of the native biodiversity as possible.

“My starting point would always be: let’s start out with the legacy ecosystem, and help it adapt to climate change, following the same processes nature does. We should depart from that legacy only one component or one process at a time, until it reaches equilibrium with current climate.”

“That is an ecologically justified, coherent approach. So it’s not leaping out to something completely novel and proclaiming it’s a brave new world, all the rules are suspended.”

He recognises the techniques and tools we need to restore adaptive capacity are barely invented or tested. In the Arizona forest, for example, they would involve “assisted gene flow” – selecting and planting pines with the most fire-resistant genes in the most vulnerable areas. They would include a degree of assisted migration, and thinning dominant fire-prone species while introducing more resilient ones.

There are “big unanswered questions” about such strategies, he acknowledges. We do, however, know what will happen if we don’t try them out, and if that does bear thinking about, then we had better, he argues, start trying them very soon indeed.

In advance of UN intergovernmental climate change talks in Katowice, Poland – known as COP24 – in mid-December, this is the first of two features on the science of climate change. Next week: Paddy Woodworth examines the potential from peatlands.