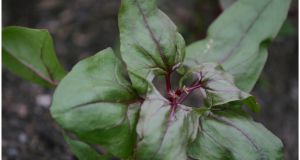 A ‘sniffer spinach’ that can detect hidden explosives has been created by scientists. File photograph: Bryan O’Brien

A “sniffer spinach” that can detect hidden explosives has been created by scientists.

The vegetable alternative to airport sniffer dogs was produced by embedding the plant’s leaves with tiny chemical sensors.

When the spinach sucks up ground water tainted by explosive, it primes itself to send out a light signal that can be read by an infra-red camera one metre away.

The signal is switched on by shining a laser onto the leaves.

The research is said to be one of the first demonstrations of “plant nanobionics” - the wedding together of plant biology and electronics.

Lead researcher Prof Michael Strano, from the Massachusetts Institute of Technology (MIT) in the US, said: “The goal of plant nanobionics is to introduce nanoparticles into the plant to give it non-native functions.

“Plants are very good analytical chemists. They have an extensive root network in the soil, are constantly sampling ground water, and have a way to self-power the transport of that water up into the leaves.”

Prof Strano pointed out that the spinach signals could easily be read by an adapted mobile phone camera.

“This is a novel demonstration of how we have overcome the plant/human communication barrier,” he said.

The new research is reported in the journal Nature Materials.