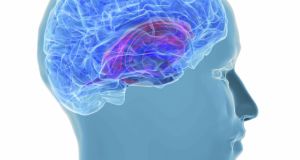 The spectre that a form of brain damage associated with Alzheimer’s disease could infect healthy people via certain medical procedures has been raised by a research group in London.

Cross infection is the most likely cause being proposed by the University College London scientists for four individuals who had significant brain and blood vessel damage of a kind normally seen in Alzheimer’s patients.

“The patients we saw did not have Alzheimer’s disease,” stressed Prof John Collinge director of the UK Medical Research Council Prion Unit at UCL.

All of a group of eight patients had been exposed however to growth hormone derived from pituitary glands collected from 800,000 deceased people.

These patients all developed and died from Creutzfeldt-Jakob disease (CJD) and their brains were then subjected to detailed study. This revealed that four of the eight had a very severe build up of the kind of amyloid beta plaques seen in Alzheimer’s disease.

“This is not what you would expect from chance. This seems like human transmission of the pathology,” Prof Collinge said.

The research was published Wednesday evening in the journal Nature.

The practice of using human derived pituitary glands to produce the hormone stopped in 1985 after cases of CJD started to arise in patients who received it. CJD has an incubation period of 30 or 40 years so more cases could arise but so far 1,848 people developed CJD and of these 77 have died Prof Collinge said.

There has been much research into CJD since, in part fuelled by the outbreak of a similar disease in cattle. This in turn transferred into humans as variant CJD.

Research showed that CJD could potentially transfer between individuals as a “prion” so routes for this transmission were closed off. This included not reusing surgical tools in contact with brain or nervous tissues of a person with CJD.

The same held for dental treatments where nervous tissues were involved such as root canal.

The concern was that the prion could adhere tightly to metal surfaces, avoid the cleaning process and then transfer to another patient, Prof Collinge said.

What was not expected was to see Alzheimer-like damage in these CJD patients, all of whom were relative young. “This was very surprising. You simply don’t see this level of deposits in younger people,” he said. The level of damage was more typical of an older patient with advanced Alzheimer’s disease.

These patients do not have Alzheimer’s however, only the buildup of amyloid beta plaques. These buildup then break to form “beta seeds” and Prof Collinge believes these could represent a means of transmission.

Currently there is no way to detect beta seeds. “We really don’t know what a seed is,” he said.

For this reason he argues the kind of precautions taken with CJD should now be considered to avoid any possible spread of the beta seeds.

“This in no way is saying Alzheimer’s is a contagious disease,” he said. Nor would he advocate an immediate change in surgical or sterilisation procedures. “There is no immediate need for action at all.”

He has however informed the UK Department of Health of his findings.

“I wouldn’t want to cause any concern but it would be prudent to do some research moving forward,”he added.

His conclusions have been met with considerable scepticism by the Alzheimer’s research community.

“There is no evidence that Alzheimer’s disease can be transmitted from one person to another, or through use of contaminated surgical instruments, and these results should be interpreted with a great deal of caution,” said Prof David Allsop of the University of Lancaster.

“Does it have implications for [for example], blood transfusions: probably not, but this definitely deserves systematic epidemiological investigation. Does it suggest Alzheimer’s disease is infectious through contact? Almost certainly not,” said Prof John Hardy of UCL

“While this is a beautiful piece of investigative medicine, we have to keep the findings in context. These results certainly do not provide sufficient evidence to believe Alzheimer’s disease is a transmissible illness,” said Prof Masud Husain of Oxford. Nor were there reasons to worry about catching Alzheimer’s from dental procedures.

“There remains absolutely no evidence that Alzheimer’s disease is contagious or can be transmitted from person to person via any current medical procedures,” said Dr Doug Brown of the Alzheimer’s Society.

Tina Leonard Head of Advocacy and Public Affairs at The Alzheimer’s Society of Ireland said: “While the findings certainly sound alarming, there is currently no evidence that Alzheimer’s is a contagious condition that can be transmitted from person to person via a medical procedure.

“We would urge that caution be exercised when interpreting these results. What we do know is the biggest risk factor for Alzheimer’s is age, along with genetics and lifestyle factors such as smoking, obesity and high blood pressure.

“However, all research that sheds light on potential causes of Alzheimer’s and the related dementias is welcome. What we really need is for the concept of “brain health” to inform government policies geared at promoting a healthy lifestyle, which it is believed could prove significant in reducing the risk of dementia.”