A Trinity world first for a blob of bitumen 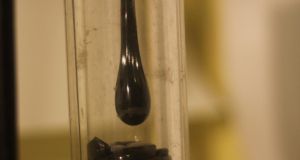 Only scientists could make a blob of bitumen sound interesting. And don’t knock this world record-breaking achievement until you have watched the video.

Scientists at Trinity College Dublin have made a breakthrough, proving once and for all that ordinary rock-hard bitumen, aka pitch or asphalt, does actually flow like a liquid through a funnel. And they have the pictures to prove it.

This may seem like a matter of little import and yet the proof that bitumen is a super-viscous liquid remained beyond the grasp of science until this month when physicists at Trinity proved it using an experiment that has been running at the university since 1944.

The main obstacle to success was that the process is so slow it takes about 10 years for the bitumen to ooze down the funnel, form a droplet and then finally break off. Watching paint try is compelling viewing compared to staring day after day, month after month at a blob of pitch that is two million times thicker than honey and 20 billion times thicker than water.

So it wasn’t enough that someone having a look every decade or so would find a blob there, someone had to see the blob actually fall. And the Trinity physicists are the first to achieve this, capturing the exciting moment on video as the bitumen drop finally dropped.

Prof Shane Bergin of Trinity’s school of physics is the first to acknowledge that this experiment will not deliver new science. What it can deliver however is public interest, attracting people’s natural curiosity, he said.

“It is tapping into that human interest.” People get into science because of a natural interest, or seeing something for the first time. “It is the reason why scientists enjoy their jobs,” he said. Curiosity is at the heart of all good science, he believes.

Of course adding a sharp competitive edge to being the first to see the pitch drop fall also helped, with physicists at the University of Queensland providing it. Their own pitch drop experiment has been underway since 1927, making it the world’s longest running experiment.

And while the Australian’s apparatus has seen eight drops come and go, no one was around to witness them. So Trinity’s film represents a unique achievement that can never be beaten.