A link between physics, maths and the Mayans

Prof Werner Nahm’s work in blending a rigorous mathematical discipline with theories about how the universe formed has had an international impact, and he is also an authority on Mayan texts 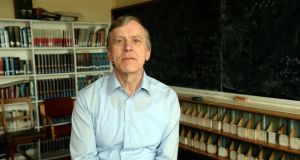 Werner Nahm: left California for a professorship at Bonn University, but then moved to the Dublin Institute for Advanced Studies. Photograph: Eric Luke

‘Renaissance man” seems a fair enough description for someone who can read Babylonian cuneiform writing, speak Mandarin Chinese, translate texts from the Mayan civilisation and also manage to be an expert on mathematical physics.

Prof Werner Nahm of the Dublin Institute for Advanced Studies has managed all of these feats. Like any great scientist, his driving force him is curiosity.

His science has attracted major national and international awards for its impact and importance to quantum field theory and string theory. Nahm, who is director of the school of theoretical physics at the Dublin Institute, received the Royal Irish Academy gold medal for physical and mathematical sciences in January – an award that came as a “big surprise” – and the Max Planck Medal in 2013. He was made a fellow of the Royal Society in 2011 and has a collection of other distinctions and awards besides.

His work in blending a rigorous mathematical discipline with theories about how the universe formed has had a huge international impact.

There had been a “divorce of physics and mathematics” in the 1930s. “What physicists did in this field did not make much sense to mathematicians,” he says. This still causes problems, with physicists proving to be “mathematically unclear or cumbersome, and out-of-reach for mathematicians”.

“Since I am both a physicist and an external member of the Max Planck Institute for Mathematics in Bonn, I am in a good position to bridge the gap.”

His work will help to explain how the universe formed and why it is the way it is, and experimental work coming from the Large Hadron Collider at Cern, on the French-Swiss border, may support or undermine his research findings.

“You can never know. There have always been surprises in physics, and physicists know that nature can come up with something entirely unexpected.”

It might seem a major leap to move from quantum theory to translating the Mayan writing system from 2,700 years ago, but not for Nahm.

“My first permanent position was at the University of California, Davis, where I had several Native American friends, some with an interest in Mayan things,” he says. The Maya civilisation existed in what is today Mexico and it developed a writing system along with advanced art, architectural, mathematical and astronomical skills.

They used a hieroglyph writing style and recorded their history and works on astronomy and maths in hand-scribed books, but all of these libraries were burned by the invading Spaniards.

“The Mayans had a good view of the southern skies, but their observations have been lost.”

Only three books remain, and a fourth has just 10 pages remaining, he says. The last Mayan city fell to the Spanish in 1697.

But many hieroglyphs chiselled into buildings and stone monuments survive today, and Nahm started to translate their meanings. “I was one of the first to be able to read the Mayan inscriptions on stone.”

His studies of Babylonian cuneiform arose from his interest in ancient history and the ebb and flow of civilisations (see panel). He believes that climate change could have been responsible for the rise and fall and rise again of these civilisations.

“My recent publications on cuneiform should lead to a better understanding of the reaction of societies to climate change,” he says.

He left California to take up a professorship at Bonn University, but was then tempted to make the move to Dublin and the Institute for Advanced Studies.

“In a way, it was because of Lochlainn O’Raifeartaigh, who was here at the institute. I had met him on various occasions and he had invited me over.”

When O’Raifeartaigh died in 2000, some people in Dublin asked if Nahm might consider coming to the institute as Prof O’Raifeartaigh’t successor. “I applied and was encouraged by mathematicians I knew from the UK and from Bonn.”

His interest in ancient forms of writing carries through to Ireland and the ogham alphabet used in the early Irish language. The only remaining examples of ogham are found on vertical stones etched with the letters.

“Seven years ago I suggested to my colleagues from Celtic studies [at the institute] to do a 3D laser recording of ogham stones,” he says.

“There was strong support for the project, which was energetically pursued by our school of Celtic studies. It was very difficult to get funding, but by now around 100 stones have been scanned.”

How does a mathematical physicist come to know how to read the earliest-known form of writing, which dates back 6,000 years? It was a matter of interest and also a bit of free time, says Prof Werner Nahm. “I got interested in ancient history, and the progress of technology and society as these two interacted. I also wanted to understand why things could go from prosperity to dark ages and back,” he says.

His main area of study also hit a quiet patch, which gave him some free time to explore his historical interests. “Quantum field theory went through a difficult time in Germany because of the emigration of leading Jewish physicists. This gave me free time because the things I wanted to learn about were not being offered in German universities.”

He wanted to know whether local climate change might have fed into these periods of societal highs and lows, but there were gaps in the cuneiform records that made it difficult to fix dates when things were happening.

He learned how to read cuneiform characters on ancient Babylonian clay tablets. “If you want to understand the link between population and climate change, you have to have data,” he says. Historical data from the tablets was there, but the chronology was missing, so there was an “open question” on when major events happened.

“We knew the sequence of kings of Babylon 3,700 years ago but not the era when these kings ruled because of gaps in the texts.”

He realised, however, that known events such as comets and eclipses could be linked in a time sequence with references in the clay tablets, providing a way to set dates for when the kings of Babylon reigned.

Prof Nahm’s work fixed a date for the start of King Hammurabi’s reign at 1784 BC by linking the cuneiform records to the year of a solar eclipse that took place during the reign of his great-great- grandson, Ammizaduqa.