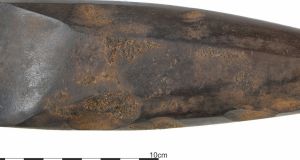 Archaeologists believe the highly-polished stone axe, known as an adze, was made especially for the funeral of a very important person, whose remains were cremated and then buried at the site. Photograph: Ben Elliott 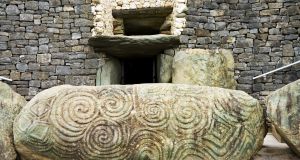 Situated on the banks of the river Shannon at Hermitage, Castleconnell, the burial site, dating back to between 7,530 and 7,320 BC, is twice as old as Newgrange (above)

Analysis of an axe that is more than 9,000 years old, found at Ireland’s earliest burial site, in Co Limerick, has shed light on the ancient burial practices of our hunter-gatherer ancestors.

Archaeologists believe the highly-polished stone axe, known as an adze, was made especially for the funeral of a very important person, whose remains were cremated and then buried at the site.

Microscopic analysis has revealed the shale tool, believed to be the earliest fully polished adze in Europe, was only used for a short time, and then deliberately blunted.

Situated on the banks of the river Shannon at Hermitage, Castleconnell, the burial site, dating back to between 7,530 and 7,320 BC, is twice as old as Newgrange.

It was discovered 15 years ago, and contained burial pits holding the remains of individuals who had been cremated.

Artefacts recovered from the earliest pit were recently analysed by a team from the Department of Archaeology at the University of York, led by Dr Aimée Little. Their paper on the subject has been published in the Cambridge Archaeological Journal.

Speaking to The Irish Times, Dr Little said the discovery showed the general perception that people living in Ireland during the Mesolithic period were “just hunter-gatherers roaming around the island, chipping away at bits of stone” is completely incorrect.

“You have really, very complex behaviour at play here, in terms of the making and treatment of the adze as part of the funerary rights,” she said.

“We make the argument it was probably commissioned for the burial and was probably used as part of the funerary rights, possibly to cut the wood for the pyre for the cremation, or to cut the tree used as the grave post marker.”

Dr Little said there were examples of other adzes partly polished in Europe which date from earlier, but nothing completely polished to such a high degree and with such a high finish.

“It is found on an island, which is incredible in itself . . . and it is actually found in a burial, which is even more remarkable,” she said.

She said it offered a rare and intimate glimpse into the complex funerary rituals taking place on the banks of the Shannon and how people were grieving their dead at this time.

Dr Little also highlighted the skill involved in the cremation itself, which would require temperatures of between 645 and 1,200 degrees.

“To achieve that level of cremation takes a lot of fuel and a lot of understanding of how to actually perform a cremation,” she said.

“A lot of time, and care, and effort went into collecting every single fragment of bone to put into the burial.”