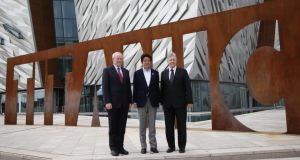 First Minister Peter Robinson and Deputy First Minister Martin McGuinness in the wake of the G8 are turning their investment eyes towards Japan as a Japanese company announced 416 new jobs for Larne, Co Antrim.

In the past two years the First Minister and Deputy First Minister have been on trade missions to countries such as China, the US, India and Brazil, and Japan could be soon on the itinerary after Mr Abe invited them to pay a visit.

At the Titanic Belfast visitor centre, Mr Abe described Northern Ireland as a “treasure trove of challenge, openness and innovation”. He also met Japanese business people who employ more than 2,000 people in the North. Mr Abe spoke of his high hopes that Mr Robinson and Mr McGuinness would soon visit Japan to seek further investment.

Mr Robinson accepted the invitation and added, “The prime minister of Japan has a special place in our hearts because he was the first of the G8 leaders to arrive and one of the last to leave so he is staying with us longer than other leaders have.”

Terumo BCT in Larne is headquartered in Lakewood, Colorado. It is a member of the Terumo Group family of companies owned by the Terumo Corporationin Japan. The new jobs are being supported with more than £2 million (€2.3 million) of funding from Invest Northern Ireland.

It will bring total employment at the plant to more than 600. Terumo BCT is also investing over £2 million in two research and development projects with £500,000 support from Invest NI. Mr Robinson, welcoming the announcement, said it was a much-needed jobs boost which would be worth over £6 million in annual salaries.