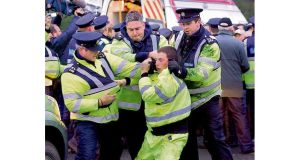 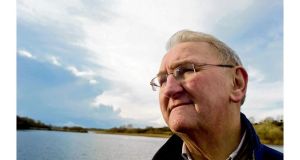 THE SENIOR garda responsible for policing the Corrib gas project in north Mayo says he believes the force has handled the situation there far better than counterparts in Denmark during the recent climate change conference in Copenhagen.

Tony McNamara, who has just retired as chief superintendent in charge of the Garda Mayo division, also says he believes that lack of adequate dialogue by developers with residents in the early stages of the Corrib gas project caused a “fundamental breakdown in trust”.

“That’s been a failure of politics at local level in many instances in Ireland,” the former chief superintendent told The Irish Times. “People get frustrated when they don’t get adequate information. Eventually, dialogue will have to provide the solution to the Corrib gas dilemma,” he says.

Mr McNamara, who is originally from Achill, Co Mayo, says that reports of the Danish police response to climate change activists in Copenhagen indicate that his colleagues in Mayo had handled their situation “very well” since Garda numbers were increased in north Mayo in autumn 2006, to provide security for Shell staff.

The Department of Justice’s latest figure for the Garda overtime cost for Corrib since 2006 is €12.6 million to the middle of December 2009.

Mr McNamara has spent 40 years in the force. He has served in all four provinces, but spent much of his time in Mayo.

During a period in Belmullet, he became the first garda to serve as a second coxswain of an RNLI lifeboat – in this case, the new lifeboat station at Ballyglass.

Among the many taskings in which he participated was the successful rescue of four surfers off the Sligo coast in 1995. Two helicopters were searching for them in approaching darkness, amid dwindling hopes of their survival.

“It was the most amazing feeling of my life when we spotted them, alive, in the lifeboat’s searchlight and brought them back to shore,” he recalls.

Mr McNamara is among 800 gardaí nationally who retired last year at a time of a Government embargo on recruitment and promotion.

He places great store in the value of community policing. However, he acknowledges that the Corrib gas project has “overshadowed” the situation in Mayo.

“Our position always was to ensure the law was respected by all sides,” he says, and he emphasised that he would “reject at every turn” accusations by objectors that “we were Shell cops”.

Two months ago, the Government’s northwest Mayo forum, which was formed over a year ago by two Ministers in a bid to resolve issues associated with Corrib, was told by the Garda Síochána Ombudsman Commission that 75 per cent of complaints made about policing aspects of the Corrib gas project were admitted for investigation.

The ombudsman commission also confirmed that it had recommended that disciplinary action be taken against a senior member of the Garda (since transferred to Dublin) in relation to the handling of a protest at Pollathomas, Co Mayo, in June 2007.

The former chief superintendent says he could not comment on cases that were sub judice or still under investigation, but gardaí had dealt with “very challenging” situations where he believed that a “small group of people” had influenced others.

He also takes issue with some media reporting in autumn 2006, when work resumed on constructing the Corrib gas terminal just over a year after the jailing of five Rossport men.

“There was one occasion where it was reported that there was a baton charge on protesters,” he says. “In fact, there was technical deployment of batons by a sergeant and seven gardaí.”

A number of people were injured during the autumn 2006 protests.

“Gardaí are still held in high regard in Mayo, in spite of all that has happened,” Mr McNamara adds, “and I was told this on my retirement by a large number of people from Erris.”