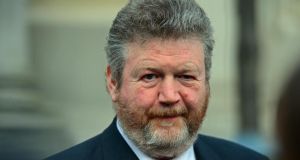 Minister for Health James Reilly has said the threat of an arson attack on his home by anti-abortion campaigners will not deter him from legislating on the issue.

Dr Reilly received an anonymous letter threatening to burn down his home in Rush, north county Dublin, and also had protestors outside his home.

He said he was not intimidated by the threats, but his family would prefer not be hearing about them.

Speaking after opening the new Pharmaceutical Society of Ireland (PSI) offices in Dublin, Dr Reilly said he was only one of a number of TDs who had been on the receiving end of threats by anti-abortion activists and they were now extending them to journalists too.

“Lots of people are enduring what I think is unfortunate and unnecessary . There are a small number of people who have gone much further than they should have gone,” he said

“We’re all in the same boat. There’s an awful lot of people who have been at the end of this, but when the bill passes through the Dáil, as I expect it to do, things will settle down. It is where we are at and we are determined to live up to our obligations.”

Dr Reilly also pointed out that the Taoiseach and the chairman of the Oireachtas Committee on Health Jerry Buttimer had received threats too.

The Taoiseach told the Dáil last week that he had been called a murderer and had letters written in blood sent to him.

Mr Buttimer said he had pickets outside his office every Friday for the last two months and he had been subjected to talks of threats of “assault and murder”.

The chairman of the Fine Gael parliamentary party Charlie Flanagan said he had no difficulties with protesters picketed his offices or marching on the street, but a “line has been crossed” with the targeting of TDs’ homes.

The issue has been raised several times at Fine Gael weekly parliamentary meetings.

“It is important that the protestors would respect the private lives of individuals, their private homes, their families and that people would desist from personalised attacks,” he said.

Mr Flanagan previously described anti-abortion protestors, who had anonymous put up posters around his constituency, as akin to the Klu Klux Klan, but now admits it was a “bit over the top”.

However, he said he had personally received “pretty distasteful mail” from both sides but the bulk of that correspondence had come from the anti-abortion side.

He revealed that other TDs had received threats of a “fairly serious nature” that had been referred to An Garda Síochana and international experience on the issue of abortion had shown that there were people “who are prepared to back up these threats and that’s the fear”.

The anti-abortion campaign has also said they have been the subject of intimidation by pro-choice activists.

Last week Caroline Simons, the legal adviser to the Pro-Life Campaign, said the organisation had received three death threats to its offices in Baggot Street*. The campaign has received two threats in recent weeks.

She urged TDs to go to the gardaí rather than the media if they are facing threats.

US presidential debate in quotes: ‘It’s hard to get any words in with this clown’ 08:23
Three men due in court over west Dublin shooting 08:17
Eir says its 5G network has grown threefold since launch 08:03
Galway church visited by Columbus and used as stables by Cromwell’s troops celebrates 700 years 07:57
NPHET officials to join Donnelly at Oireachtas Covid-19 comittee 07:55